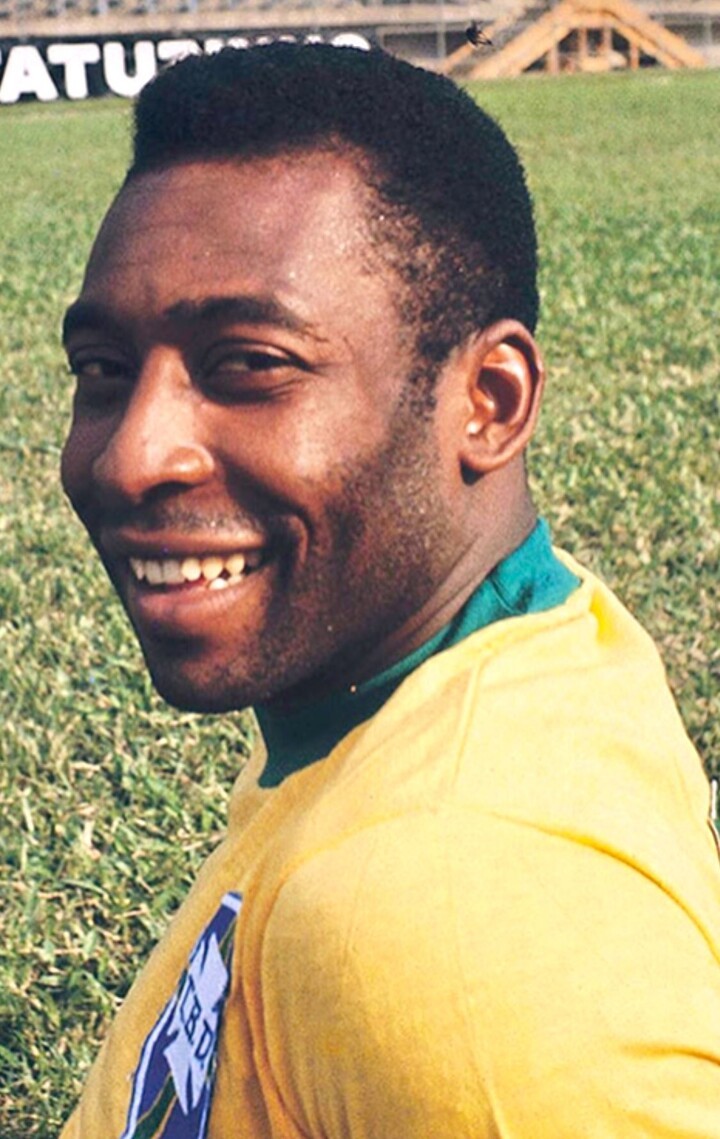 Dondinho and Celeste named their first son Edson after Thomas Edison, one of the greatest inventors in history. His family nicknamed him ‘Dico’, but he received the moniker ‘Pele’ in school due to his mispronunciation of Brazilian goalkeeper, Bile.

Dondinho was a lower-league footballer. “To this day I’m very proud that my father is the only player I know of who scored five headers in one game,” Pele told FIFA.

Dondinho and his friends, transfixed to a radio, were euphoric – Brazil had just gone 1-0 up in a decider against Uruguay they only needed to draw, at the Maracana in 1950, to win their first World Cup. A nine-year-old Pele therefore left home for a kickabout with friends.

"When I got back I was dumbfounded,” Pele recalled. “It was the first time I saw my father cry. He was devastated. I promised him, ‘One day I will win you the World Cup.’”

Waldemar de Brito, the former Brazil striker, was coaching Bauru, now-defunct state minnows, when he discovered a boy wonder on their books. He took Pele for a trial at Santos, boldly proclaiming his protégé would become “the best player in the world”.

Coach Lula heard this, chuckled, but upon seeing Pele during his first training session immediately handed him his first-team debut, which Pele scored on as a 15-year-old in 1956. Over the next 18 years the forward propelled Santos to 25 major titles, including two Copa Libertadores and Intercontinental Cup crowns apiece.

With Inter Milan, Juventus, Manchester United and Real Madrid having all tried to sign Pele, the Brazilian government, under president Janio Quadros, declared him an ‘official national treasure’ to prohibit him moving overseas.

Pele immortalised the No10 jersey across the globe – but only by chance. Brazil forgot to submit their squad numbers to FIFA for Sweden 1958, so they got chosen randomly. Virtually all made no positional sense – goalkeeper Gilmar and centre-back Zozimo were allocated the No3 and No9 respectively – but Pele, who began as a reserve, somehow got the number he duly made the most famous in football.

The man who stopped a war

Between one and two million people died during Nigerian Civil War from 1967 to 1970. Astonishingly, a 48-hour ceasefire was called between the Nigerian government and the secessionist state of Biafra in 1969 so they could watch Pele and Santos draw 2-2 with the Nigerian Super Eagles, with ‘The King’ receiving incessant applause and a standing ovation from the home fans.

Merely two-and-a-half months before Mexico 1970 kicked off, Joao Saldanha, who masterminded Brazil’s perfect qualification campaign, unthinkably dropped Pele for a friendly against Chile. A few hours later he was sacked.

CBF officials hurriedly raced to a Botafogo training session, unannounced, and told Mario Zagallo to get in the car because he was the new Seleção coach. Exacting the trust his former team-mate had in him, Pele persuaded Zagallo and team doctor Lidio Toledo to take Tostao, who had suffered a career-threatening eye injury, to the tournament.

‘The Beautiful Game’, a universally-used nickname for football, was coined by Pele. He also baptized Brazil’s Mexico 1970 champions as ‘The Beautiful Team', which also stuck.

The King of New York

Soccer barely existed in New York in the early 1970s. Celebrities did. A who's who of the world's biggest.

But when the New York Cosmos sensationally brought Pele out of retirement in 1975, soccer’s popularity exploded, the Cosmos became the most glamorous club on the planet and ‘The King’ became the VIP of VIPs in NYC.

“Absolutely everybody wanted to shake his hand, to get a photo with him,” said Mick Jagger of Pele’s presence at Studio 54. “Saying you had partied with Pele was the biggest badge of honour going.”

“Hey, dad, how come you’ve never taken us to see a soccer game,” Bart asks Homer during The Cartridge Family episode in 1997. The next scene shows the Simpsons at Springfield Stadium to watch Pele initiate a game between Portugal and Mexico.

The likes of David Beckham, Ronaldo, Cristiano Ronaldo and Neymar have since appeared on The Simpsons.

Pele has loved music all his life and composed hundreds of tracks since the early 1960s. He famously carried a voice recorder with him everywhere because “a song can some into your head at any time – even at a World Cup.”

A few years later, the brand ‘Pele’ was named the globe’s second-biggest according to a survey – astonishingly bigger than oil and gas supermajors, banks, automotive manufacturers, airlines, telecommunications titans and everything other than Coca-Cola.

Pele, Muhammad Ali and Jackie Robinson were the only sportspeople to make the much-publicised 1999 Time magazine compilation of The Most Important People of the Century.

That same year, Pele was one of nine sportspeople bestowed by the International Olympic Committee with the ‘Athlete of the Century’ award, despite, amazingly, having never partaken in the Olympic Games. Others included Carl Lewis, Mark Spitz and Nadia Comaneci, three of the most triumphant athletes in Olympic history, Steffi Graf and Michael Jordan.

Pele was the inaugural recipient of the Laureus Lifetime Achievement Award in 2000.

FIFA: “Many thanks for taking the trouble to be here, Cafu.”

Cafu: “Wow! Are you saying thank you because I came here to record this for ‘The King’s’ 80th birthday? I thank you!”

Pele, no words will ever do you justice, but the above exchange, and the desire of so many footballing legends, the world over, to go out of their way during these troubling times to honour you, perhaps best illustrates the incalculable amount you mean to football.

Thank you for everything, and have a BEAUTIFUL 80th birthday.