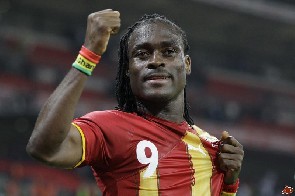 Ukraine-based midfielder Derek Boateng's hard work at club level has earned him a place in Ghana's starting line-up to face Swaziland in a Nations Cup qualifier on Friday night.

The Dnipro FC ace has been playing top-tier football the last five years but has been constantly overlooked by previous Ghana coaches.

Ghana coach Goran Stevanovic has picked the 28-year-old to pair Emmanuel Agyeman-Badu in the middle of the park in the absence of crocked Michael Essien.

Under the 44-year-old Serb, he has been called for all matches and handed playing times.

In June, he was a second half substitute in the 3-0 home win over Congo at the Baba Yara Stadium.

Boateng, then at Spanish La Liga side Getafe, was not picked for the 2010 Nations Cup finals in Angola but he made the squad to the World Cup finals in South Africa.