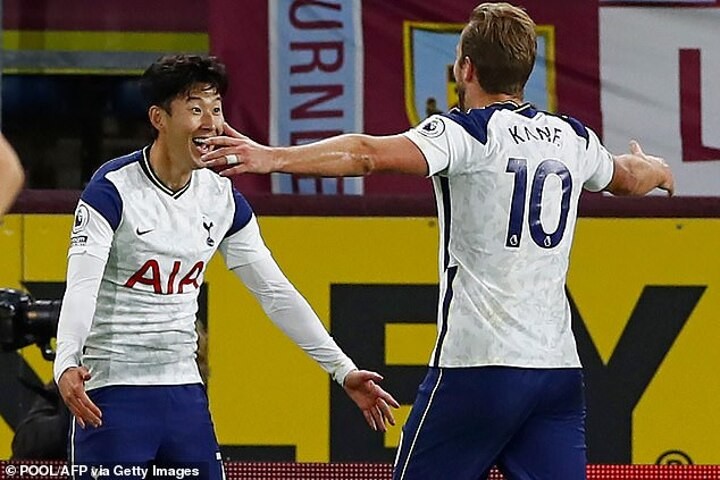 Harry Kane claims Tottenham 'can do something special' this season after he and Son Heung-Min combined for a ninth time in the 2020-2021 campaign.

Kane assisted Son once again with a flick-on to see Spurs beat Burnley 1-0 at Turf Moor to move Jose Mourinho's men up to fifth in the Premier League.

Kane says he is excited about the club's potential – having gone unbeaten in 10 matches in all competitions, progressing through to the Europa League group stages and making the quarter-finals of the Carabao Cup – but insists it is 'too early' to discuss the Premier League title.

Speaking about his partnership with Son, the Tottenham captain told BBC Sport: 'It is great.

'Me and Sonny have had a nice little partnership going recently and hopefully it continues.

'I think having more understanding when I'm dropping deep for him to run in behind [is the difference]. It is just confidence as well.

'Even today it was not an amazing assist but it fell well for Sonny.'

The Burnley combination was the 29th time the duo have linked up for a goal in the Premier League.

Such a tally makes them them the joint second-best partnership in the league's history - behind only Didier Drogba and Frank Lampard who totalled 36.

Individually, Son is the leading goalscorer with eight, while Kane has been involved in 13 goals this season - breaking the record for most goals and assists contributed within six games.

When asked about Tottenham's current form, Kane expressed his excitement about his teams potential.

'I think we are at a stage where we have been so close for so many years, a lot of us have been together for four or five years,' he told Sky Sports.

'The additions this year have been great and we are all getting more experienced. We know with the team we have got and the players we have got we can do something special.'

However, when asked about Totteham's chances of winning the Premier League, Kane insisted it was too early to tell.

He said: 'It's still early on. We need to take each game as it comes.

'I know it's a cliche. We still have a lot to learn and build on but I think nights like this will give us a lot of confidence.'