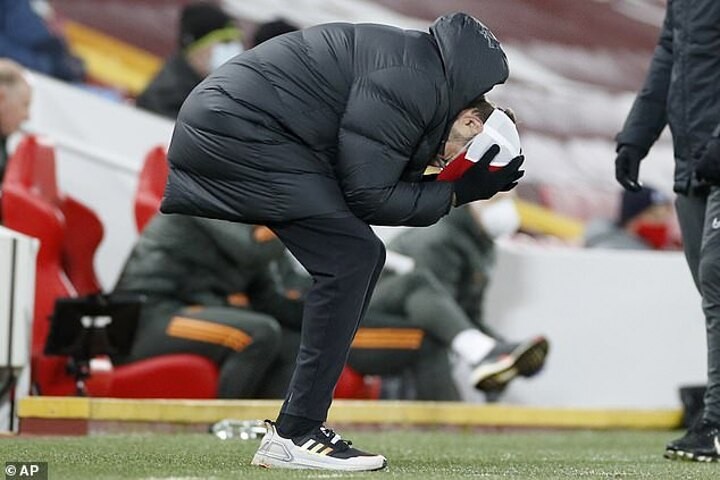 That toothy smile and belly-laugh was all many fans saw and heard throughout the 2019-20 season as Jurgen Klopp pioneered Liverpool's first league title in 30 years.

Accolades flowed in. He made it back-to-back The Best FIFA Men's Coach and was also recognised as the best in the business at the more recent BBC Sports Personality of the Year awards.

Rivals envied Liverpool for having a manager so personable, relatable and charismatic. But those that were once green with envy are now looking at a man who appears irritated, out of sorts and devoid of that charm that endeared him to English football.

Klopp had his moments in the run to the title, certainly, where he showed an intense side to his personality, the side that was in no mood for smiling.

But void of a pre-season, losing half of his first choice defence to serious injuries and being exasperated with the fixture pile-up caused by the Covid-19 pandemic, Klopp has, more often than not, appeared at breaking point this time round.

As he addressed the media after losing to Burnley, Klopp took 'full responsibility' for what was a game he felt was 'impossible' to lose given they had 72 per cent of the ball at Anfield.

'We lost the game which I think is pretty impossible to lose but we did it,' Klopp told Sky Sports.

'And that's my fault because my job is to make sure the boys have the right feeling and having the right amount of confidence and they make the right decisions.'

It was the latest case of the champions faltering in a game they were expected to come through with relative ease. Klopp's players lacked the killer punch and paid the price.

But the story of the night came in the tunnel as the teams headed for half-time level at 0-0. TV cameras picked up a furious Klopp in pursuit of Burnley boss Sean Dyche, the German's fiery temper on full display.

Tempers flared between the two teams on the pitch when Burnley's Ashley Barnes become involved in a scrap with Fabinho and Klopp was not ready to let it go when the managers exchanged words in the tunnel.

Klopp has never been an angel on the touchline but it has been some time since he has appeared so angry and on edge as he was in his altercation with Dyche, something he later said he 'didn't start'.

And it is by no means an isolated argument Klopp has had this season. His page of moans and gripes is fast filling up.

Despite appearing to accept that there would be no new arrivals this month when asked at the start of January on his expectations, defeat to Burnley seemed to sour Klopp's willingness to stick with the squad as it is.

'This club always was - and will always be with these owners - just very responsible with the things we do,' he said at the start of the January window.

Fast forward to the final whistle at Anfield on Thursday and a less-than-impressed Klopp took a different approach, dramatically claiming he has no say if signings are made.

Another decision that he has consistently felt angry he has had no say over is the condensed schedule - an ire BT Sport's Des Kelly soon found out down at Brighton's AMEX Stadium.

Pascal Gross scored a stoppage time penalty to strip two points from Liverpool on the road and Klopp proceeded to launch an extraordinary rant at the broadcaster. There would be no light humour, no hint of a smile, just a scowl and an axe he was keen to grind against governing bodies and broadcasters.

Kelly checked in on the severity of the latest setback as Klopp sarcastically said 'congratulations' and continued his steadfast stance over the toll the fixture congestion is taking on his players.

'Well you work for them,' Klopp told Kelly, clearly furious with BT Sport. 'Ask Chris Wilder how we can work on that. I don't know how often I have to say it, but you pick the 12:30 kick offs.

'Between now and December there is one more Wednesday, Saturday. These are difficult times. I am just saying it how it is. Wednesday to Saturday 12:30 is really dangerous.'

Previously Klopp has looked infallible to adversity that is inevitable at the elite level. Results go awry. Injuries can be devastating. No fans certainly isn't helping as Klopp fed so impressively off the passion of the supporters. But now every little thing seems to bother him.

Sticking at three substitutes instead of five left him apoplectic while his jibes with rival bosses have gone from intriguing and exciting to rather awkward.

As Chris Sutton coined in his Sportsmail column, Klopp has gone from Mr Motivator to Mr Moaner in a matter of months.

Prior to facing Manchester United, Klopp said he 'found it easier to be the hunter' rather than the hunted. Whether that really is true, only Klopp knows. But if it is, he has a funny way of showing it.

United have been one of Klopp's main targets outside of his rows with broadcasters about the timings of games.

After Sadio Mane was not awarded a penalty against Southampton, in a game Liverpool went on to lose, Klopp referenced Liverpool's great rivals in his bid for an explanation.

'I hear now that Manchester United had more penalties in two years than I had in five-and-a-half years,' Klopp said. 'I've no idea if that's my fault, or how that can happen.'

It wasn't quite right but the message was clear. It wasn't quite Rafa Benitez's infamous press conference on favouritism around Sir Alex Ferguson but it felt petty for Klopp. It felt like blame deflection after another disappointing defeat.

Then there came the game against United and pre-match Klopp was fired up.  'I know Ole said that this is the best moment to play Liverpool. Yeah? Let's see,' he said.

By the end he tore into United's tactics as Solskjaer's side left with a point to stay top of the league.

'We played football, tried to do it, force them back into their own box,' he complained to BBC Sport.  'The worst thing you can face in the world, in football, is you play against a side with world-class players and they all defend with all they have, deep in the box and only counter-attack. It's really difficult - that's the biggest challenge.'

Touchline celebrations, the famous fist pumps, have been more often than not this season replaced by animated pointing and head buried in hands. He looks a completely different character when the pressure piles up.

Much like his players, Klopp needs to get his mojo back, the charm that won over so many needs to return to restore harmony. Failure to do so could see his bid to reclaim their title stuck in first gear.