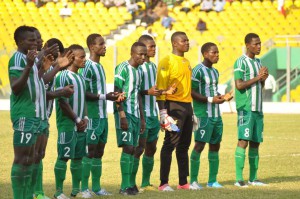 Hasaacas have joined New Edubiase as the confirmed relegation teams for this season.

The Western Show Boys lost 2-0 at Techiman City on Wednesday to confirm their relegation status.

They have thus joined New Edubiase, who got relegated a couple of weeks ago.

Liberty Professionals, Techiman City, Berekum Chelsea and Ebusua Dwarfs will fight off on the final day to avoid joining the two teams in the country's second-tier league.