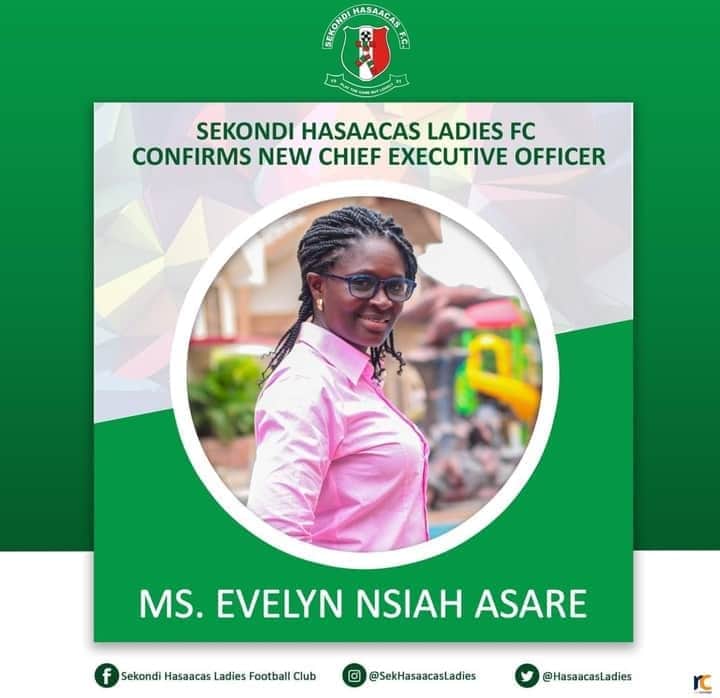 The budding sports administrator has been elevated to the position of the C.E.O effective August 1, 2020.

Ms. Nsiah has worked with several multinational companies across the country. She has vast experience in the football fraternity, telecommunications, logistics and supply chain management, and has taught at several institutions, the latest being the Sunyani Technical University.

After an incredible service as a management member of Hasaacas Ladies, leadership of Hasaacas settled on Ms.  Nsiah  as the new Chief Executive Officer.

Speaking about her appointment, Samuel Arbuah the Chief Executive Officer of Sekondi Hasaacas Football Club opined that – “Sekondi Hasaacas Ladies FC has huge potential to chalk major successes off the field looking at the unprecedented achievements since its establishment in 2003.

“It’s also expected that several other people who have contributed immensely to the cause of the club in the winning of its 4 national championship trophies be applauded.

“This is a new chapter of the club’s seemingly impressive run and everyone is expected to assist in ensuring Ms. Evelyn Nsiah Asare’s administration succeeds”.