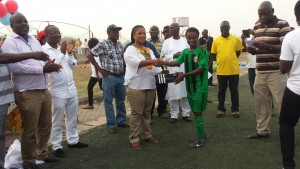 Hasaacas Ladies center back Janet Agyiri was adjudged the 2015 Best Player of the National Women's Championship.

The ladies from the west defeated Ampem Darkoah Ladies in the final game of the NWC at the Tema Park  by a lone goal through Samira Suleiman in the 66th minute.

Janet capped her impressive performance for the Southern Sector champions with a brilliant and resilient play at the back to make the day a difficult one for Ampem Darkoah Ladies' striker Priscilla Adobeah.

Janet who played the entire ten matches for Hasaacas Ladies in the Southern Sector was very instrumental in the final game and her magnificent performance was rewarded with the Best Player Award.

Priscilla Adobeah of Ampem Darkoah Ladies was the Most Promising Player of the Championship while Beatrice Ntiwaa was adjudged the Best Goalkeeper of the season.

Other Awards such as Fair Play Team of the season went to Ampen Darkoah Ladies.