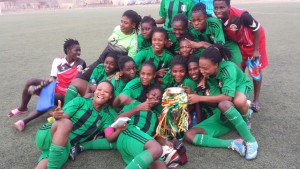 Hasaacas Ladies cemented their dominance by winning the National Women's Championship for the third time by beating Ampem Darkoah Ladies -1-0 in the final in Tema on Sunday.

Samira Sulemana capped her impressive play with a magnificent header to break the virginity of the game in the 66th minute after the first half ended goalless.

Ampem Darkoah took charge of the first half creating brilliant chances but striker Priscilla Adobea could do less to fetch the opener.

Hasaacas Ladies announced their dominance by coming close to breaking the deadlock but was denied by the Ampem Darkoah goalkeeper when the game was 25 minutes old.

The second half commenced with Hasaacas Ladies taking control of the entire half.

A tactical change by coach Yusif Basigi did the trick when Hillia Kwablah was moved to the left back position.

The Hasmal Ladies nearly got the second goal to increase the tally when Linda Eshun out-jumped her marker to head the ball which missed the Ampem Adroah post by inches from a Janet Egyiri corner kick.

Hasaacas Ladies have since won the National Women's Championship for keeps.

For their prize, the Hasmal Ladies will take home GHC3000.00 in addition to a trophy while the runners up took home GHC2000.00.