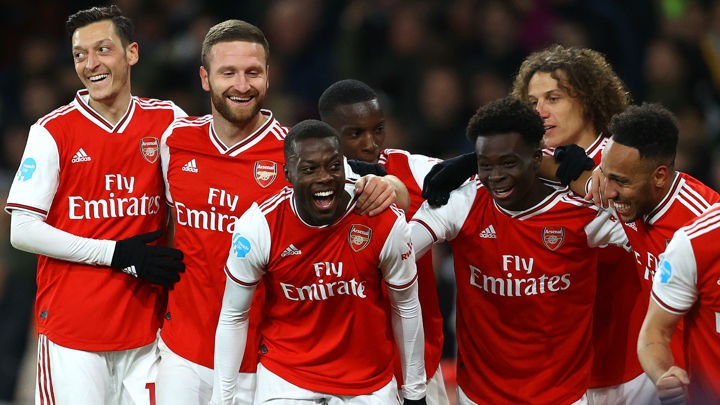 Was this the afternoon that Arsenal finally kickstarted their season?

For the first 45 minutes it looked like being a case of same old story as they toiled against Newcastle’s disciplined backline, but an excellent second-half performance blew Newcastle away to earn Mikel Arteta his first league win since Manchester United were seen off on New Year’s Day.

Goals from Pierre-Emerick Aubameyang and Nicolas Pepe in the space of three minutes gave the Gunners some much-needed breathing space before late strikes from Mesut Ozil and Alexandre Lacazette put the finishing touches on a well-earned win for the Arteta’s side, who now move to within seven points of the top four.

Arsenal’s head coach had spoken in the build up to this fixture about how crucial the next few weeks would be in terms of Arsenal’s season, with a favourable run of fixtures in the league coming up as well as the Europa League kicking off again.

So, he will have been delighted with how things panned out, especially after such a disappointing first half.

The Spaniard brought in Dani Ceballos for his first league since the 1-1 draw against Wolves on November 2 and also recalled Nicolas Pepe, with Gabriel Martinelli dropping to the bench.

And both players were integral to Arsenal’s victory, with the Spanish midfielder producing arguably his best display since his magical home debut against Burnley was back in the August sunshine.

Before he was substituted with eight minutes remaining, Ceballos has made 91 passes, 85 of which were successful, with 63 of them coming in the Newcastle half.

It was Ceballos who started the move for the opening goal nine minutes after the interval, sweeping a ball out wide to Pepe, who curled in a sumptuous cross for Aubameyang to expertly head home.

Pepe then got on the scoresheet himself three minutes later, although the goal was mainly down to the brilliance of Bukayo Saka, who produced a fabulous nutmeg to beat Valentino Lazaro before finding the Ivory Coast winger with the perfect pass.

Newcastle did go close to pulling a goal back when Allan Saint-Maximin hit the post, but that was a rare chance for the visitors, who ended the contest well beaten.

Indeed, by the end, Arsenal, who had been so poor before the break, had their swagger back, as was so wonderfully illustrated by the third goal, which was scored by Ozil and came at the end of a move which included 35 passes – more than any other goal scored in the Premier League this season.

Lacazette, who had just come on for Eddie Nketiah, set it up with an excellent cross and the France striker then put the seal on Arsenal’s afternoon when he broke his nine-game run without a goal, sweeping home after being picked out by the excellent Pepe.

That’s six goals and seven assists now for Pepe this season, who is finally beginning to look at home in north London following his big-money move from Lille last summer. Only Aubameyang (18) and Martinelli (13) have been directly involved in more goals for Arsenal this season.

Not bad for a player who was harshly labelled as one of the flops of the season just over a week ago by the Italian media.

Arteta backed Pepe amid that criticism and he will have been delighted with how the winger responded ahead of such a crunch period in Arsenal’s season.

With fifth place potentially being good enough for a Champions League spot now this season given Manchester City’s impending European ban, Arsenal have suddenly been giving a new lease of life in the Premier League.

Pepe and Ceballos proved key to the revival.