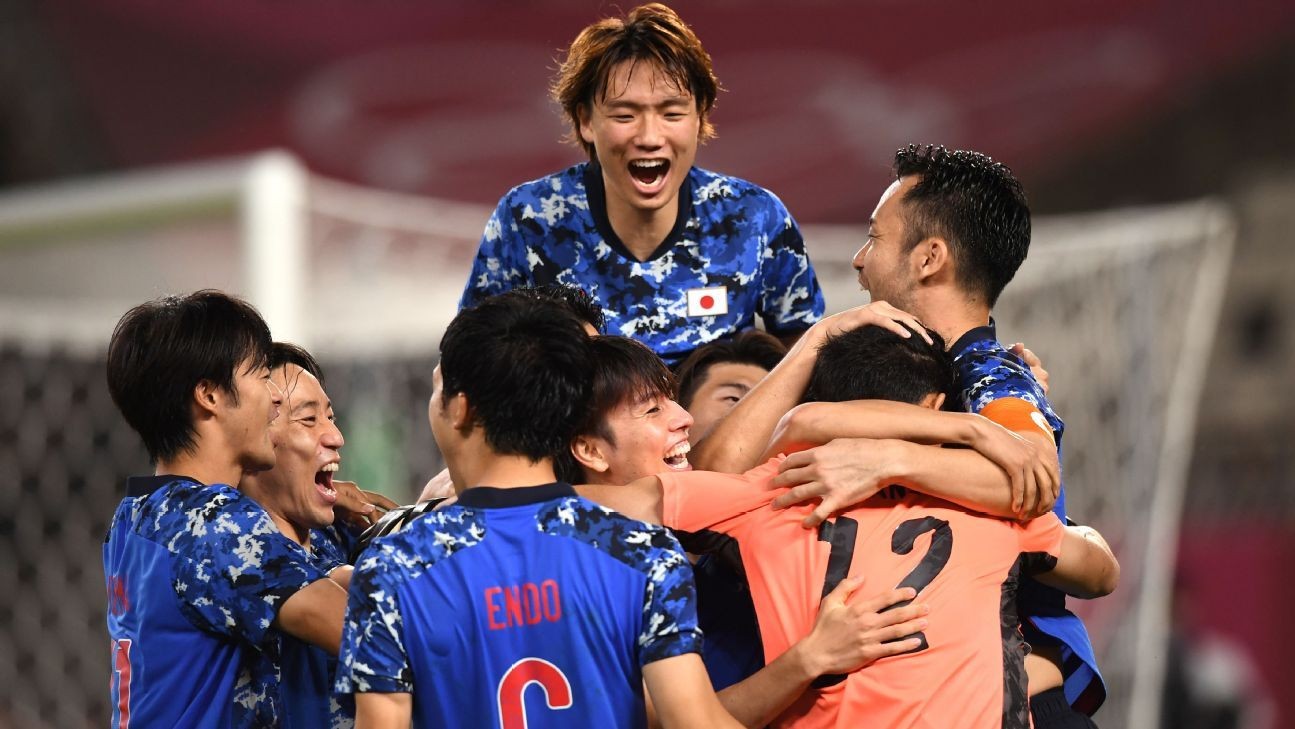 Having seen off four teams in the men's football competition of the Olympic Games so far, Japan have shown they what it takes see off the pretenders in their charge to the semi-finals.

If they are to stay alive in their gold medal quest, they will now have to prove they are capable of beating fellow genuine contenders as they enter the business end of Tokyo 2020.

First up for them in are Spain. Win that and it will be either Brazil or Mexico awaiting in the final.

All four teams are deserving of their place in the semis as arguably the quartet that have impressed the most so far at the Games, so it is anyone's game at the moment.

Since the men's football competition became an under-23 competition in 1992 (under-24 just this time around due to its postponement from last summer), the Samurai Blue have never won a medal. The only time they did that was when the senior team claimed a bronze in 1968.

Either way, a historic achievement beckons for the Japanese but do they have what it takes to -- first and foremost -- see off a talented Spanish outfit?

Japan captain Maya Yoshida was part of the side that missed out on a medal at London 2012 following defeat to South Korea in the bronze medal match. Julian Finney/Getty Images

Bearing in mind that Spain entered the Tokyo Olympics as one the favourites, especially given they boast six players who recently reached the semi-finals of Euro 2020 with the senior team, it is not going to be an easy task.

Spain showed plenty of resolve, but also how damaging they can be in a short period of time, when they came from behind to beat Ivory Coast 5-2 in the quarter-finals.

Having forced extra-time with a 93rd-minute equaliser, just two minutes after the Ivorians had taken the lead for the second time in the contest, the Spanish piled on three more goals in the additional 30 minutes to claim what eventually was an emphatic win.

But that match also showed that Spain do have their vulnerabilities. The first goal they conceded came down to slack marking from a set-piece, while there were also several other instances when Ivory Coast found plenty of space in the opposition's defensive third.

Despite ultimately claiming a 5-2 extra-time win, Spain did show some weaknesses in their Tokyo Olympics quarter-final clash with Ivory Coast. Koki Nagahama/Getty Images

In towering defenders Maya Yoshida, Takehiro Tomiyasu and Hiroki Sakai, as well as fleet-footed attackers Takefusa Kubo and Ritsu Doan, Japan are well equipped to capitalise if Spain exhibit those weaknesses once again.

And as strange as it may sounds, the Samurai Blue could actually have more joy against the Spanish than they did in the quarter-finals against New Zealand, who were more than content to play on the back foot for 120 minutes and frustrate their opponents before ultimately losing in the penalty shootout.

Spain will look to take the game to Japan on Tuesday. While Hajime Moriyasu's charges enjoy controlling possession themselves, the likes of Kubo and Doan also thrive in hurting teams on the transition.

Having fallen short in the bronze medal match in 2012 before a group-stage exit four years later, it would seem that a medal of any colour would be an achievement for the Japanese.

Yet, if they can pull off a victory over Spain, there is no reason why the Samurai Blue cannot take heart in beating one of the best and start believing they can claim the gold -- regardless of whether it is Brazil or Mexico they potentially meet in the final.