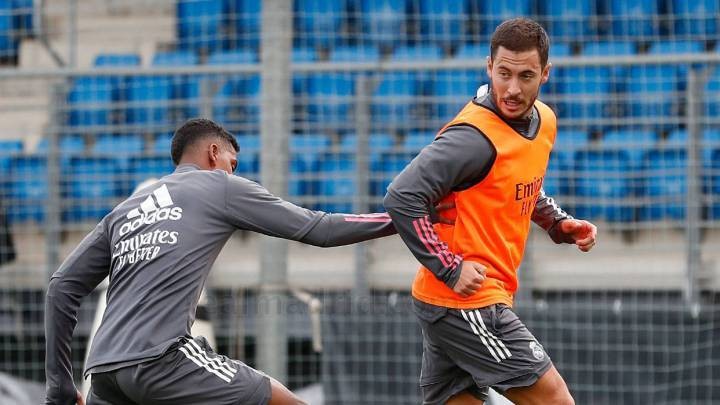 The Belgian has travelled to Germany for Madrid's Champions League fixture with Borussia Mönchengladbach, and is expected to be Zidane's first choice on the left wing when he returns to full fitness.

Real Madrid defeated Barcelona 3-1 in the first El Clásico of the 2020/21 campaign on Saturday, a vital win for the club and Zinedine Zidane, after consecutive home defeats. Sunday also brought more good news to fans of Los Blancos and Zidane, with the return of Eden Hazard to training with the rest of the squad. The Belgian international has been included in the 21-man squad to face Borussia Mönchengladbach in the Champions League in Germany on Tuesday.

Hazard got injured on September 30, although the problem really occured in training on the 29th. The Belgian took part in the last session prior to Real Valladolid's visit to Valdebebas, but on the morning of the match he got up in pain and went to Valdebebas to be checked by the club doctors, who diagnosed a muscle tear in his right leg (the club did not specify the area in their medical report). More bad news in a horrendous opening year for the forward in the Spanish capital.

After over three weeks out, Zidane gave an update on the €100 million signing from Chelsea, before the Shakhtar Donetsk match. "The only thing is that his injury is a little more than expected." Despite the setback last week, Hazard has arrived back before expected and travels to Germany with the squad.

When he is fit, the 29-year-old knows that the left wing position will be his, which opens up the fight for the right wing. Vinicius Jr, Rodrygo, Asensio, Lucas Vázquez are all candidates. Vinicius has earned a starting role this season, with Hazard out and has three goals to his name. His problem is his natural position is that of Hazards, on the left, to cut inside and shoot on his right side.

Last year, Zidane admitted that the Belgian's presence in the squad naturally slowed Vinicius down: "Last year Eden wasn't there, it's his position and (Vinicius) has to keep working. It's a bit complicated for him, like it is for everyone." The coach has already shown his reluctance to change Vinicius to the right flank. "I find it more difficult on the right, but I am working on it and I ask Zidane to put me on the right," the Brazilian said in September 2019.

Asensio at home on the right wing

Despite Vinicius' difficulty playing off the right, Marco Asensio feels more comfortable on the right wing, where he can cut in onto his trusty left foot. The Spaniard was a starter in the disaster against Shakhtar, but failed to shine on the night. Zidane went ahead and handed him a start in the Clásico on Saturday. He hardly shone in attack, but his defensive commitment to contain Alba was commendable; he is still far from his best, but Zidane seems determined to persist with the former Mallorca man.

Rodrygo and Lucas Vázquez are also on the list of candidates to occupy the right flank going forward in the 2020/21 campaign. The Brazilian is a super talent - one Zidane has very high hopes for - already placing his faith in him on big European nights. It was already clear last year and he has also shown it again this year, but Rodrygo's current form is not the best and it was clear against Shakhtar, where he barely made 14 passes in the first half and was withdrawn at half-time for Benzema. With time on his side and more development he can become a regular in the starting eleven. Vázquez is now focusing on filling in at right-back, with Carvajal, Odriozola and Nacho all out injured.