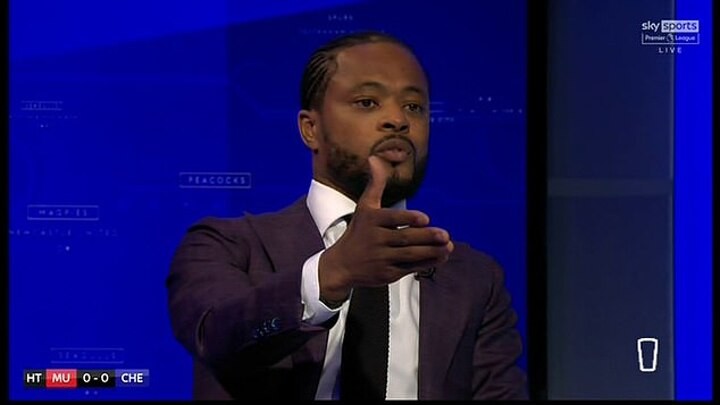 Patrice Evra has questioned Ezgjan Alioski's reaction to the headbutt which saw Nicolas Pepe sent off during Sunday's draw between Arsenal and Leeds.

Things boiled after 50 minutes when the pair exchanged pushes before Pepe made the decisive contact, with Alioski quickly falling to ground as Reiss Nelson made his way infield with the ball.

Referee Anthony Taylor stopped play as the North Macedonian stayed down clutching his face and after reviewing the footage on the pitchside monitor, brandished the red card to send Pepe for an early bath.

'It came from frustration but you can see Pepe isn’t happy and it’s just a frustration and he should say sorry to all his team-mates,' said Evra after the game.

'Arsenal had a plan and it all changed after that. Alioski deserves an Oscar, I mean come on, it looked like he broke his nose from his reaction but it was silly from Pepe. You shouldn’t come and cry when you’re not playing the next game.

Freddie Ljungberg also had his say, saying: 'The rules are the rules, you can’t do that in today’s game. Pepe hasn’t done that much and he will be disappointed.

'Tierney has a bit of an edge and I like to see that. He showed he has a bit about himself. On Pepe, he stops his on progress and he looked frustrated. I thought this would’ve been a good game for him and would’ve been a match-winner.