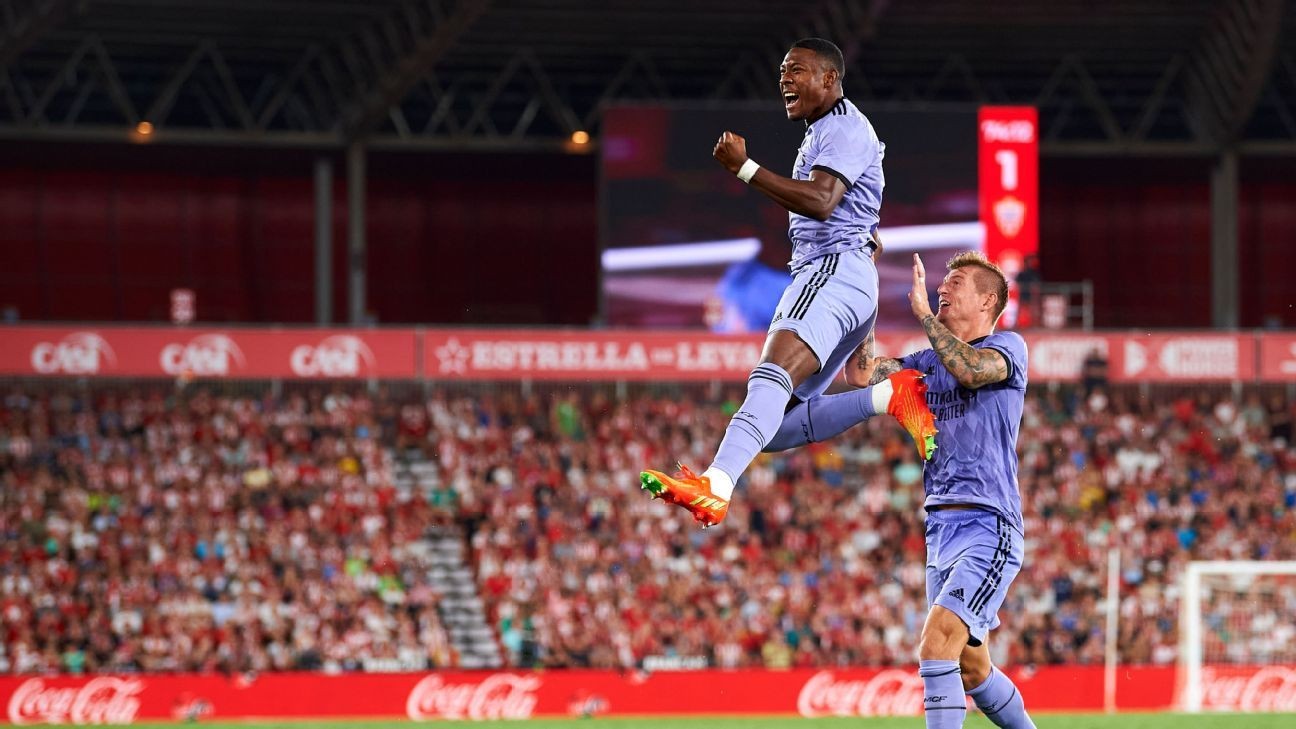 The ball fell from high, high up in the night sky: 40 or 50 yards it went, spinning and bending, coming down fast and from an awkward angle. Positioned near the touchline, the former Chile international barely moved, almost imperceptibly shifting into position, and watched it all the way onto his right foot as if guiding it there himself, a Jedi mind trick. Then he tamed it with a single, gentle touch so soft he could have been wearing slippers, directing it obediently to his left before flicking it to one of his players. All of it with the nonchalance of a man not trying.

On the bench, Real Betis's subs and staff started to clap too. There were giggles, mouths hanging open, faces that said: bloody hell, did you just see that? Oh, they had seen alright -- and that was the manager who had just done that.

Asked afterwards about that moment, Manuel Pellegrini, Betis's 68-year-old coach, a man who hasn't played in 36 years, smiled. "Well," he said, "I had to be on the same level as the team."

That's some level -- and it wasn't just Betis.

It was late on Monday night and his team had just closed the first weekend of another league season with a 3-0 win over Elche. It had opened four days earlier with their neighbours Sevilla, who lost 2-1 at Osasuna, the first goal of the year headed in by Chimy Avila, he of the homemade tattoos, the wildest life story inked on his skin, and thighs the size of jamons.

Americans in Europe: Where the USMNT's World Cup hopefuls are playing across the Atlantic2dESPNHow to watch European soccer this season: Your guide to must-see games, teams, players17hBill ConnellyWhich clubs make the most profit in the transfer window?2hTor-Kristian Karlsen

It couldn't have started at a better place, and it probably couldn't have closed at a better one, too: El Sadar and the Benito Villamarin packed and alive, loud. And between that Avila goal -- just nine minutes into the 2022-23 season, the noise at El Sadar engulfing everything -- and Juanmi's beautifully taken strike a bit before 11 p.m. on Monday, a lot had happened. And a lot of it so good.

There were goals everywhere, except Barcelona and Athletic Club, which didn't make much sense and certainly didn't mean boring. After all, Athletic took 23 shots, including two that thumped off the post, and Barcelona took 21 of them. Robert Lewandowski did have the ball in the net on his debut at a Camp Nou as full as it has been for a year -- for the men's team, at least -- and it was gorgeously taken, only for it to be ruled out for offside. Seven years running he had scored on the opening night, but that was in Germany. Spain is something else, something good.

There were 49 debutants in primera, quite a lot of old faces too -- you'll never guess who got Celta Vigo's first goal of the season -- and plenty of the kind of moments that make it. "La primera en la frente," Julen Lopetegui said at the end of the opening night of the opening weekend. Roughly, it means something like: bam, right from the start, a smack in the face. And it felt like that. Not so much because of the absurdly weak penalty that he quite rightly complained about -- although he was right, having just witnessed the referee make exactly the kind of decision that just four days earlier, they had promised not to make -- but because of the whole thing. This hit you, some sensory overload.

"I'm very emotional, I feel like crying," said Aimar Oroz. A 22-year-old kid from just 10 minutes up the road making his first start for Osasuna, at El Sadar, he scored the winner from the penalty that Lopetegui moaned about -- a first match that had a wild, frantic and very fun start eventually settled from the spot. He had the nerve to take it. Not just to take it, in fact, but to take it from Avila.

"Pressure?" Oroz said afterwards, "Nah. It's just you, the ball and the goal," and now he was beaming. "I feel like a little kid," he continued, and not just because, well, he is one, standing there with a cheeky grin, not really knowing what else to say. "I slept alright last night, but I reckon I won't tonight."

He was not the only one. Jackson and Baena, two youth products, got Villarreal's goals the next day as they went top with a 3-0 win at Valladolid, although they would later be joined there by Betis and Atletico. Baena's second, in particular, was superb -- a belting shot flying into the top corner.

Then there was Barcelona, finally able to swap palancas for play but being held by Rayo Vallecano, who actually should have won it in the last minute and who might have only really had two chances but arguably had the game's best two. They didn't, despite Isi Palazon flying, but that's now three times Rayo have played Barcelona under coach Andoni Iraola over the past 10 months; they haven't conceded a goal.

Before that, Espanyol came from 2-0 down to draw 2-2 at Celta. Iago Aspas scored the first, but you knew that. Espanyol's new signing Joselu got the equaliser in the 98th minute.

"It's hard to explain," said Celta manager Chaco Coudet, but it was easy: Oscar Mingueza, who he had sent on in the 91st minute to shore things up, gave away a penalty that Joselu was never going to miss. And which, quite apart from the drama and the enjoyment, suited new manager Diego Martinez perfectly: his celebration, grabbing at his players and throwing them together, underlined the value he saw in the way they had done it, how it might help to fast-track the unity every coach seeks.

That was Saturday. Sunday brought us manager Gennaro Gattuso soaked in sweat at Valencia, where Carlos Soler scored the only goal, Take Kubo getting the winner for Real Sociedad from what he called a "mad" pass by Mikel Merino, and the first division champions against the second division champions. Almeria, back in Spain's top flight after seven years, even went and scored first after just five minutes, 50 seconds against Real Madrid, the place going wild and, for about an hour believing that maybe, just maybe, they could actually do this.

play0:49Real Madrid go ahead on a free kick from David Alaba

Real Madrid go ahead on a free kick from David Alaba

But Madrid equalised through Lucas Vazquez, and then assistant Davide Ancelotti sent on David Alaba with simple instructions: score. And no, that's not a joke. He really did. The Austrian was preparing to come on when Madrid got a free kick, Carlo's son urging his dad to make the change quicker than planned, Karim Benzema waving at Alaba to come and take it too. And so he did, curling the ball into the net off the post with his very first touch, running back to the bench where he was told: told ya.

There was more. Ernesto Valverde came back to San Mames on Monday -- "It was emotional," he said -- and then Atletico scored three at Getafe, which doesn't even begin to tell the story.

Anticipation was high for Robert Lewandowski in his LaLiga debut for Barcelona, but his lone goal against Rayo Vallecano was pulled back after being ruled offside. Urbanandsport/NurPhoto/Getty Images

All three goals came from robberies high up the pitch, Atletico cutting through the middle. One was scored by Antoine Griezmann -- a substitute who hadn't gotten a goal since January -- and two were scored by Alvaro Morata, the man more out than in a week ago, seeming in permanent search for a happiness just out of reach, but who might just have grabbed it this time, Simeone insisting afterwards "we hope he stays."

And all three of them had been provided by Joao Felix, making it almost as many assists in one evening south of the city as in the whole of last season. "That pass [for the second]..." Morata said, his lack of words just about expressing how brilliant it had been, an angled, no-look ball that took out a team.

It had been good alright, and it wasn't over yet on an opening weekend that reminded everyone why they love this -- so pleased to have it all back. Not because Nabil Fekir was going to do something insane to wrap it up, sneaking up behind Enzo Rocco and taking the ball out on the touchline, heading inside, braking, pulling away, stopping, starting, and getting into the area, still on his feet despite being pulled, kicked and pushed, the victim of at least four fouls on the run to the by line where he set up Borja Iglesias brilliantly. But because his manager was, conjuring up a magical touch that welcomed everybody back with a wow.