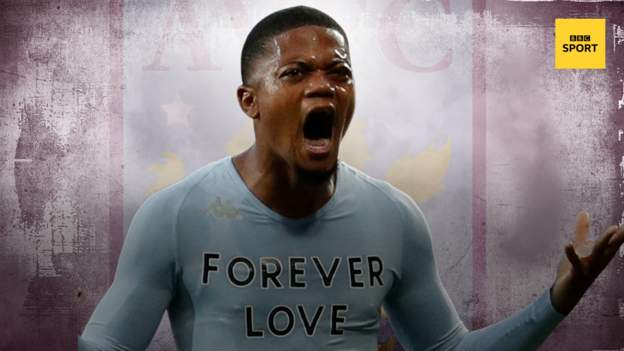 It was a home debut so short as to amount to little more than a cameo, but few inside Villa Park for the 3-0 defeat of Everton in September will ever forget how emphatically Leon Bailey introduced himself to the Aston Villa faithful.

The 24-year-old, a £30m summer signing from Bayer Leverkusen, was brought on with just over an hour played. Within 21 minutes, he had delivered a swerving corner that led directly to a Lucas Digne own goal, sealed the victory with a powerful strike and, in doing so, sustained a hamstring injury that would see him substituted and ruled out for the next three games. He could return against Arsenal on Friday.

If the Jamaican winger seemed to thump the ball past Asmir Begovic that day with singular purpose, it is probably because scoring a first Premier League goal is a moment he had been expecting for some time.

"As soon as Leon walked into the first-team changing room, you could just feel that this guy had a lot of ambition," remembers Sandy Walsh, the Dutch full-back who played alongside a teenage Bailey with Belgian side Genk.

"All of us want to make it, to make a step to a big club. But with him you could just feel it. So much ambition could be seen in his body language."

That self-belief has carried him a long way. Bailey first came to Europe aged 12, accompanied by his adoptive father, Craig Butler, and brothers Kyle and Kevaughn. Butler ran the Phoenix All-Star academy in Kingston, Jamaica, which was part football school, part foster home, and Bailey was one of more than 20 boys he has adopted.

Convinced of Bailey's talent, Butler sold his home and car to fund a cross-continental journey, but they barely had enough money to sustain themselves as they hopped from hostel to hostel, without appropriate clothes for the cold European weather. Bailey didn't see his mother for four years.

They stopped in Austria, where Butler begged Red Bull Salzburg to offer his boys a trial. The club acquiesced but declined to sign the siblings. They instead joined second-tier USK Anif after being spotted playing in a local park by the club's sporting director.

By the time Bailey was 15, Genk wanted to sign him and agreed to take on his brothers, too. However, Fifa rules preclude clubs from signing under-18 players from different continents. And when Butler travelled to Mexico for a business trip - and to obtain documents that would satisfy the Fifa laws and allow Bailey's signing for Genk to be ratified - he was kidnapped and robbed, leaving him with injuries serious enough to put him in hospital.

Bailey's older brother Travis had to take care of the boys in Belgium. Upon Butler's return, he was denied residency and fell out with Genk after the club refused to a link-up deal with his academy back home. Bailey and co had to leave, returning to Jamaica.

Undeterred, Bailey was back in Europe in February 2015, with Ajax trying to recruit him. But his age - still only 17 - meant he could not be signed professionally. He instead joined Trencin in Slovakia, with an eventual move to Ajax promised. But that switch collapsed and by August, after he turned 18, he instead - at last - signed for Genk.

"He would tell stories about before, saying he had it hard in Jamaica," Walsh remembers. "He wanted to become a sprinter like Usain Bolt, an athlete. He was choosing between that and football, knowing that the football level in Jamaica wasn't big.

Bailey settled quickly in Belgium, soon breaking into the first team and demonstrating a useful knack for scoring in the most important games, including a rasping 20-yarder in a 5-2 victory over Anderlecht. Having impressed with his skill, speed and powerful shot, he was named Belgium's Young Footballer of the Year at the end of his first season with Genk.

"When you're in the Europa League with a good team like Genk, if you can perform in the group stage and in the next round, there are going to be teams interested. But he didn't become an egoist on the pitch. He was still a team player. He was pushing me to become better, he was pushing the guys around him with assists and trying to have everybody happy in the changing room."

After a stellar start to his second season in Belgium, Bailey moved to Leverkusen for 20m euros in January 2017, reportedly declining offers from Chelsea, Manchester City and Manchester United. He still had his eye on the Premier League though.

"He was doubting whether to go to Germany or England," Walsh recalls. "If you perform in the Bundesliga, the way to the Premier League is much easier. Knowing the past, with Romelu Lukaku and [fellow former Genk standout] Kevin de Bruyne going to Chelsea, he saw that the step from the Belgian league to the Premier League is a big step. De Bruyne went to Germany and then became the main player at Manchester City."

Bailey's form undulated across three-and-a-half seasons with Leverkusen. He raced to 11 goals and five assists in his first 22 appearances of the 2017-18 campaign but added just one more goal to his tally that season. The highs included an impressive series of stunning strikes - not least both goals in a 2-1 win at Bayern Munich in November 2019 - but the lows led to him falling from favour, starting just 12 Bundesliga games in 2019-20.

But Bailey rediscovered his best form last season, scoring a career-high 15 goals and providing 11 assists, adding a level of consistency and maturity to his unquestionable talent.

"He's a very good player, very skilful, a fast player with a very good shot," says Leverkusen's director of sport, Simon Rolfe. "He came here as a really young guy and developed a lot. At the end, he was a really top player.

"He is very self-confident. He is a good team-mate. He is helpful to the other guys in the locker room. He was always a full part of the team.

"There was a lot of interest in him in the last years because of his performances. This summer, he wanted to join the Premier League and that's why we agreed with Aston Villa for the transfer."

He might only be 24 and with his best years ahead of him, but Bailey's lightning-rod Villa Park bow was more than a decade in the making, the realisation of a long-held Premier League dream.