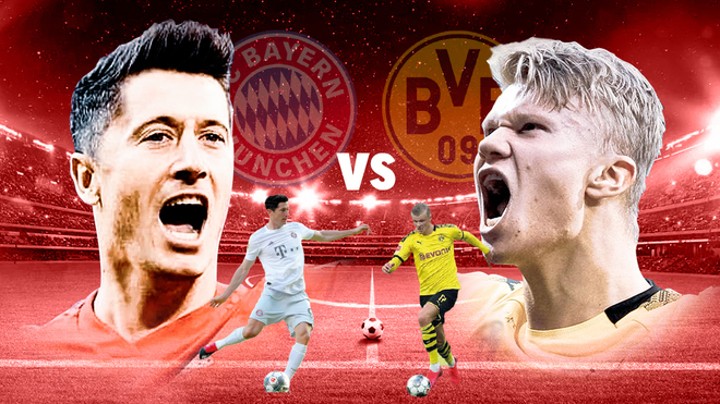 Borussia Dortmund have a recent history of turning out great No.9s.

Erling Haaland has been hitting all the headlines since his January move, but the side also moulded current Bayern Munich striker Robert Lewandowski into a world-class forward.

The two front men are dominating the Bundesliga goalscoring charts at the moment and their goals could be crucial in deciding who wins this year's title, as Bayern face Dortmund in Der Klassiker on Tuesday, May 26.

Lewandoski joined Dortmund in 2010 before heading to Bayern in 2014, and he clearly thinks highly of Haaland.

"It would be good for him [Haaland] if he stayed in the Bundesliga longer. He has enormous potential," Lewandowski said ahead of the Klassiker.

"But I don't want to put pressure on him with my statements. If he works hard, he can reach the highest level."

So far, Haaland is pretty much neck-and-neck with Lewandowski in terms of their goalscoring record.

Both are the top scorers in the Champions League, with Haaland on 11 goals whilst Lewandowski has 10.

Haaland has also scored more goals up to this point in a campaign with 28 than what Lewandowski did in the season prior to joining Dortmund: 21.

What's more, Haaland has 13 goals from his first 13 games at Dortmund, while Lewandowski managed only two in his first 13 appearances at the club.

One of Haaland's greatest attributes is his desire to keep getting better and never settling for anything less than perfection.

"I've got a lot to improve!" the Norwegian stated. "My right foot, my aerial play, my technique, my left foot, my movement... Everything!"

"He has a great mentality and always looks ahead," said Favre.

"When he loses or doesn't score in a training match, you can tell he's not happy."

Since signing for Bayern, Lewandowski has shown that he's capable of becoming the goal 'king' of German football.

"He's fit. He still has time to break Gerd Muller's record," said Flick. "If anyone can, he can."

What is evident is that the battle for the 2020 Bundesliga title will come down to goals and most likely goals from these two men. So far in the 2019/2020 season, they have scored a combined total of 41 strikes.

It's their level of precision that elevates them above other strikers in the Bundesliga.

Throughout their respective careers, both have scored 39 goals from inside the box and they've also managed to get important goals in the dying minutes of matches.

The Bayern striker has hit the back of the net eight times after the 75th minute and Haaland has done so on 13 occasions.

"Knowing your opponent's resources is just as important as playing in the air or protecting the ball," said Lewandowski.

"For me, a great striker must always be precise."