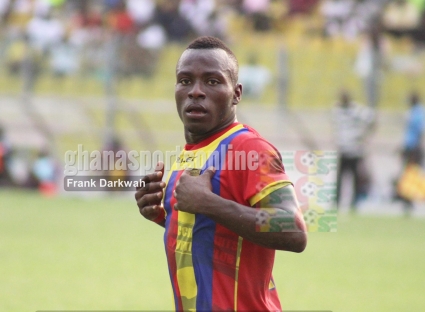 Hearts of Oak attacker Patrick Razak has reckoned the challenge of facing Wa All Stars ahead of their FA Cup semifinal clash, but says they are poised to book a place in the FA Cup final.

The Phobians are in a difficult position to clinch this season's Ghana Premier League title as they are occupying 3rd spot with 44 points, four points adrift of league leaders Aduana Stars with four games to end the campaign.

However, the club are very much in the driving seat to claim FA Cup glory but they must first solve the litmus test Wa All Stars will pose to them in the semifinal at the Obuasi Len Clay Stadium on Sunday.

Razak, who joined the team on Wednesday after helping the Black Stars B win the WAFU Cup, admitted to facing a stern test in the Northern-based side but they're well on course to end the game on a high.

"It's always difficult playing against Wa All Stars but we'll take inspiration from our league triumph over them earlier this season to record another victory," Razak told Happy FM.

"We've set target to win double this season and we're poised to finish the campaign as we planned, so Wa All Stars cannot quench that dream."