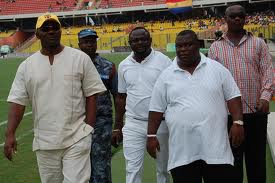 Board Member of Hearts of Oak Frank Nelson insists Sundayâ€™s defeat to Enugu Rangers is not indicative of things to come in next weekâ€™s league clash with Asante Kotoko.

The Phobians suffered an embarrassing 2-1 defeat before their fans in a game they were expected to win to cap off a month-long celebration to mark the clubâ€™s centenary anniversary.

The loss to the Nigerian club has sparked fears of perhaps what will happen when Hearts take on rivals Kotoko in the Premier League top liner this Sunday in Accra but Nelson is having none of that.

â€œFootball is either you win, lose or draw and therefore I am not disappointed with the result against Enugu Rangers,â€ Nelson said.

â€œLet Kotoko take us for granted due to this result but I know definitely come Sunday we will be picking the three maximum points.

â€œIf you know and understand football you know it is either you win, lose or draw and therefore if you lose then you should pick up the pieces and move on rather than let the result deter or disappoint you.â€

Nelson is also adamant he is not particularly worried about his teamâ€™s low goal scoring rate despite creating numerous chances in games so far played this season.

â€œThe most important thing is to create chances so I am sure it is just a matter of time before our strikers start converting the numerous goal scoring opportunities we create,â€ he added.