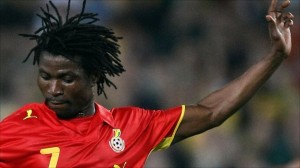 Accra Hearts of Oak coach CK Akunnor insists Laryea Kingston is still in his plans but needs to show some "respect".

The former Black Star has been at loggerheads with his coach for some time now.

Their feud escalated last week when Kingston was ejected from the team's pre-season training camp in Sekondi.

Kingston had travelled to Sekondi in his private car and is said to have defied Akunnor's orders to remove the vehicle from the base.

The much-travelled midfielder has subsequently been suspended indefinitely by the club after a disciplinary hearing.

But Akunnor says he will tap into the midfielder's "valuable experience" only when he comes round to accepting his authority.

"I don't have a problem with him but with his attitude," Akunnor told BBC Sport.

"I had a one-hour chat with him when I took up this job and told him how important he was to the whole set up.

"I have shown him a lot of respect but he has abused it.

"He should know that I'm the coach and he's a player.

"I'm in charge of the team and once he understands that we'll work together."

Kingston insists he has done nothing wrong and feels he is being victimised for speaking out against poor conditions at the team's training base.

Infrequent power and water supplies mean the camp is far from what Kingston was accustomed to during his time in Europe.

Kingston joined Hearts last season after a career that has taken him to Libya, Israel, Russia, Scotland and the Netherlands.