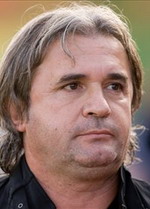 Coach of Hearts of Oak Nebojsa Vucicevic is already looking forward to beating Berekum Chelsea in their week three clash at the Accra Sports Stadium on Sunday.

The Serbian trainer led the 20-time league champions to their second consecutive win of the new season after beating Mighty Jets 2-1 over the weekend.

Though satisfied with his teamâ€™s output so far, Vucicevic is keeping focus ahead of the visit of the reigning champions.

â€œThe players played a good match today (against Mighty Jets) and for some time now the team has been playing well so I am happy with the win,â€ he said.

â€œWe go step by step and now we want a win against Chelsea, it is going to be a difficult game but I am optimistic of a win.

Hearts currently share the summit of the Premier League with New Edubiase who are ahead on superior goal difference.