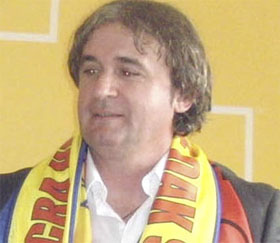 Coach Nebojsa Vucicevic insists he is only focus on restoring Hearts of Oak to its glory days despite fans agitation for his removal.

And as he leads his young team to Cape Coast this weekend for the Premier League opener with Berekum Arsenals, the Serbian trainer is well aware it is a game he must get something out of to somewhatÂ minimize the volumes ofÂ criticismsÂ he has been subjected to.

"Whether peopleÂ praiseÂ or criticize you just try to be focused and do your job as well as you can," he said.

"I don't really pay attention to any criticism. I do fell that maybe they have been a little bit too much but we are going to deal with that on Saturday."

Vucicevic has also noted that the weekend's clash with Arsenals (one of Hearts' boogie sides) presents a fine opportunity to the 20-time league champions to put things right after a poor pre-season outing.

"It will mean something to me and the team to beat Arsenals on Saturday as that is the only apology the supporters will accept.

"Especially away from home, it gives it a bit more taste. It is a special game for the players as well," he added.