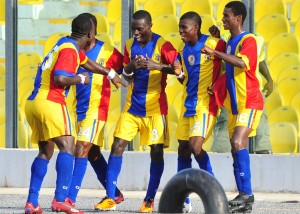 Hearts of Oak gave their title campaign a boost with a 3-2 win over ten-man AshantiGold and went joint top in the Ghana top flight.

Douglas opened the scoring in the 32nd minute when he converted a spot-kick after he had been fouled inside the box by Michael Boakye.

Six minutes after the break, striker Mahatma Otoo silenced his critics with a spectacular goal which doubled Hearts' lead.

The 19-year-old picked a ball from 15-yards, raced into the AshGold half, took on John Ashong and fired a thunderbolt straight into the net.

Hearts were in the driving seat and could have doubled the lead with Otoo coming close on few occasions.

AshantiGold pulled one back through striker Yakubu Mohammed who wriggled past two defenders before firing beyond goalkeeper Sammy Adjei.

The Miners were coming into the picture the 79th minute dismissal of centre-back John Ashong did not help matters.

He was shown a Second yellow card for hitting out at Uriah Asante.

Hearts capitalized on their numerical advantage and restored their two-goal lead with a striker from Isaac Ofori.

Ofori received a pass from Asante and dummied his marker before curling the ball into the net on 82 minutes.

AshantiGold pulled one back in injury time when Mohammed Yakubu's free-kick from the edge of the box deflected into the net.