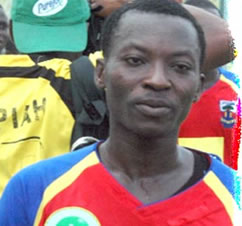 Hearts of Oak duo Kofi Abanga and Godwin Quarshiga will be available for selection in the second half of the season, GHANAsoccernet.com can exclusively reveal.

Mercurial Abanga and new boy Quarshiga are at the closing stages of their rehabilitation following career-threatening double knee injuries in October last year.

The two players underwent surgical operations in South Africa in March this year after they suffered a 'considerable damage on both knees'.

Sources close to Abanga admit it will be impossible to set a comeback date until the former Aduana Stars test his knee on the training ground.

The club says they are not in a rush to hand them playing times.

"They are recuperating well and that's very positive news. However we don't want to rush them into the team and so they will be ready by the second round of the league," Hearts PRO Albert Commey revealed to GHANAsoccernet.com exclusively.

"They should start with ball juggling soon and hopefully start full scale training in the course of the season, after which weâ€™re sure they will be available from next year."

Abanga especially was one of the club's best performers last year until he suffered the career threatening injury.