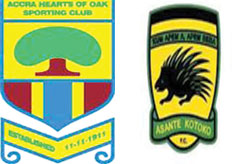 Ghanaian giants Asante Kotoko and Hearts of Oak will earn 80,000 Ghana cedis each for playing a two-legged pre-season friendly.

The sworn rivals, who pulled out of the on-going GHALCA eight-team tournament, will face battle on home and away basis.

Both clubs have agreed to play at the Baba Yara Stadium and Accra Sports stadium which will earn us 80,000 each before we kick start the matches,"

Hearts and Kotoko have won 41 league titles between them but have seen their duolopy ended by Aduana Stars and Berekum Cheslea.