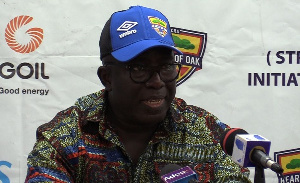 Chief Executive Officer Mr. Frederick Moore is hopeful that the club will soon get back to its glorious days with the support and contribution of all stakeholders.

The CEO of the one-time CAF Champions League winners made this known in Accra as the club together with an Accra based private tv station, OMY TV in collaboration with the Natinal Chapters Committee (NCC) launched the "Grand Hearts Gathering" aimed at bringing together the Phobia family to deliberate on future of the club.

The ‘Grand Hearts Gathering’ , which has been scheduled for November 16, at the Trade Fair Centre La, Pavillion, Accra is to coincide with the club's 108 th birthday on November 11, 2019.

According to Mr. Moore, every great thing had got some dates and days that brings back memories, and for him, that was the first day he stepped at the club's secretariat as the CEO in Mach, 2019.