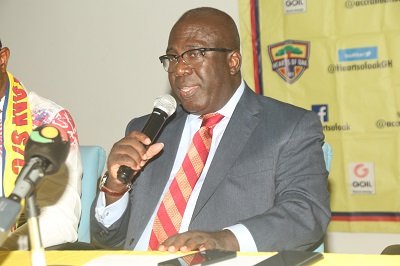 Hearts of Oak Managing Director Mr. Frederick Moore has resigned from his post with immediate effect according to local media reports.

Mr. Moore has formally tendered in his resignation letter from the Phobian club as the highest ranking executive official.

GHANAsoccernet.com understands Hearts of Oak have already began the search for a new Managing Director following the resignation of Mr. Moore who has been in charge for one year and eight months.

Mr. Moore was appointed to replace American football administrator Mark Noonan who also resigned from the role in March 2019.

Per speculations and rumours within the media space the capital club are considering names like Kenpes Ofosuware and Leslie Kuuku Bartels as well as Vincent Odotei Sowah for the vacant MD position.

The Phobians started their 2020/2021 campaign in the Ghana Premier League with a 2-2 draw against AshantiGold SC at the Accra Sports Stadium last Tuesday.