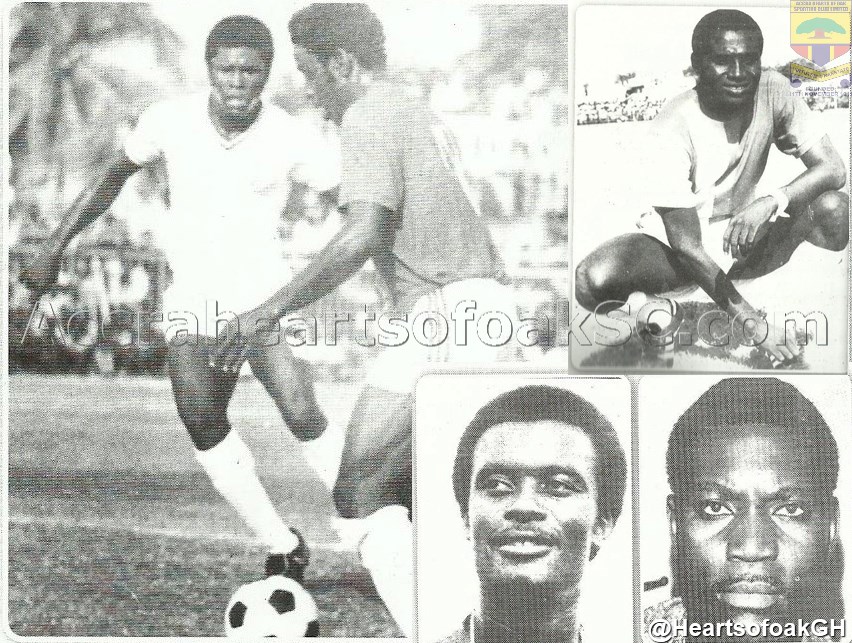 Accra Hearts of Oak beat Zambian side Mighty Mufulira Wanderers 3-0, in a game that came to be christened, “The Miracle of El-Wak” at the El-Wak Stadium on 6th November, 1977 to seal the club’s maiden appearance in the finals of the Africa Club Champions Cup.

Anas Seidu and Peter Lamptey scored in the 59th and 79th minute respectively to set up a nerve-wrecking finish before Seidu again grabbed the golden goal with barely two minutes to fulltime to send the El-Wak Stadium crowd into high-pitch delirium.

A fortnight before the day, Hearts were walloped 5-2 by Mufulira Wanderers in Zambia in the first league of the semi-final showdown in Lusaka.

The Phobians were a pale-shadow of the side that had eliminated – then burgeoning African giants – Al Ahly in the quarter-finals, without the services of magician Mohammed Ahmed Polo. And despite taking the lead in front of the 80,000 home fans through Robert Hammond in the fifth minute, they were down 3-1 before the break.

Zambian skipper Ackim Musenga restored parity from the penalty spot in the 20th minute but two goals in two minutes from veteran striker Thomas Castella Bwalya and Mukwasa handed the home side the momentum in the closing stages of the first half.

Six minutes after the break, Hearts captain Mama Musa reduced the deficit, but it only served to infuriate the hosts who added two goals through Bwalya and Makwasa to put the game beyond the Phobians.

Hearts needed three unanswered goals in Accra to qualify for the finals and their fate hanged by a thread.

The reigning Ghana league Champions had failed twice in the Africa Club Champions Cup. In 1972, the Rainbow club choked at the semi-final stage, drawing 1-1 at home and losing by a lone goal in Kampala to Simba FC, and they failed again in 1974 in the quarter-finals against Tanzanian side by name Simba FC.

But Hearts started the 1977 campaign with the sole aim of getting their hands on the most sought-after continental trophy.

And although they assembled a great side, five men stood out – heads and shoulders above the rest – who came to be known as the “Fearsome Fivesome”. They were Mohammed Ahmed Polo, Peter “goal thief” Lamptey, Anas “Thunder” Seidu, Mama “Bomber” Musa, Robert Hammond and Adolf Armah.

And so the stage was set for a debacle or a miracle at the El-Wak Stadium on the 6th November, 1977 in the return encounter. Hearts had beaten Al-Ahly at the same venue by 3 unanswered goals in the quarter-finals, but it appeared almost impossible for them to overturn or match the 3-goal deficit they suffered in Lusaka.

Many wrote them off, few believed they could achieve it, but even the skeptics wanted them to go down fighting, with honour and pride.

The sense of the occasion had got to the players and the fear of failure made it difficult for them to get their acts together in the first half.

A young 22-year-old boy from Nima by name Mohammed Polo had returned to the side after missing out in the first league.

The questioners had asked the question: Is Polo Hearts or Hearts is Polo? A rhetorical question, yet it was answered many times by Polo, but the question never ceased to be asked.

The dribbling magician weaved his wand in this most memorable of games. After a dull first half, he took the game, single-handedly, to the Zambians.

His gentle cross in the 59th minute was blasted home by thunder-man Anas Seidu for the lifeline goal. Hearts had 30 minutes to make something happen out of the game, but they had to wait for the 79th minute again to breach the Wanderers defense.

Polo, again, was at the heart of the goal. He dazzled the Mufulira defense before finding his ‘best man’ Peter Lamptey, who made no mistake, by flicking the ball past the goalkeeper.

11 minutes remained for the Hearts XI men. And with one of the defenders about to thump the ball upfront, Polo dropped deep in defense to demand for the ball which he carried forward. He fetched out his captain, the veteran Mama Acquah who paced to the right flank from midfield, replicating his days of old bombing runs which earned him the name “Bomber”, before cutting the ball across for the on-rushing Anas Seidu to bury the ball home. 88 minutes on the clock. 3-0 it read.

They said it could not be done. They said three goals could be scored, but it was impossible not to concede to the highflying Zambians who pummeled five goals in Lusaka. They said Hearts could not play in the finals of the Africa Club Championship.

But they did. They conjured the MIRACLE OF EL-WAK to progress to the finals.

However, they had expended too much energy in the semi-finals, and were unlucky not to have won the Cup in 1977, losing to Hafia Guinea 4-2 on aggregate.

The Miracle-Of-El-Wak happened just five days before the Club’s 66th anniversary epitomizing the NEVER-SAY-DIE spirit. And though Hearts did not win the cup, the legends of yesteryears shall not be forgotten for the miraculous game on the 6th November, 1977.