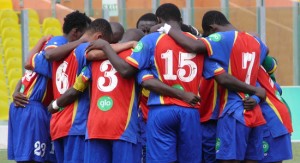 Premier League side Hearts of Oak will cut down the playing staff for the next soccer season, GHANAsoccernet.com understands.

The club plan to overhaul the squad size and trim it to just 28, raising uncertainty among the playing squad.

Players who have been on the fringes and those out of contract at the end of the season are likely to be affected by the impending drastic move.

Hearts have struggled in the ongoing campaign where the former African Champions have battled to avoid relegation for the better part of the season.

The 2000 African champions will celebrate their centenary anniversary in November this year and are therefore eager to build a squad capable of winning the championship next season.