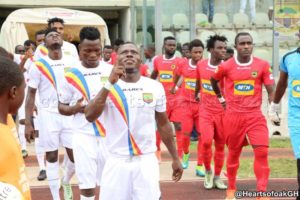 Hearts of Oak and Asante Kotoko

Public Relations Officer for the Ministry of Youth and Sports, Elvis Adjei Baah has disclosed that his outfit has received a proposal for a friendly game between Hearts of Oak and Asante Kotoko to honour former President, John Agyekum Kuffour.

The country's two most glamorous clubs are keen to serve their various teeming fans an epic Super-Clash encounter which has eluded them for the past months in the wake of the Anas Aremeyaw Anas which exposed rot in Ghana football.

Speaking to Kumasi-based Oyerepa FM, Elvis Adjei-Baah revealed that they have received a letter of proposal in regards to a friendly match between the two Ghanaian giants to honour John Agyekum Kuffour on his birthday.

"To the best of my knowledge the MoYS has received no letter on a proposed friendly to be played at Baba Yara Stadium but the only we have received is that of a match to honour former President John Agyekum Kuffour on his 80th birthday. This said match is slated for September," he disclosed.

"That's all we know of but nothing on any friendly this August. We will look at it should we receive such communique."

The two clubs have a two-legged friendly games coming up on the August 19 and September 2 at the Baba Yara Sports Stadium.

Meanwhile, the Porcupine Warriors will be engaging in an international friendly match against Tanzanian champions Simba SC on Wednesday, August 8, at the Uhuru Stadium in Dar es Salaam.