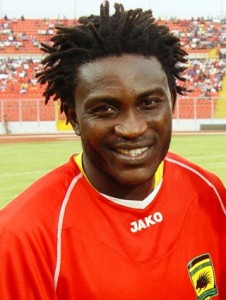 Majority of the players which won six consecutive league titles and the 2000 Caf Champions League were tipped for moves to Europe but that did not happen.

Personally, his proposed move to Ukrainian side Shakhtar Donetsk fell through under bizarre circumstances.

He played on loan for Beirut-based side Nejmeh SC and also Libyan side Al Ittihad.

Kuffour has alleged that the Harry Zakkour-led management team did not do enough to transfer them abroad by inflated their prices.

''The management of Heart of Oak at that quoted high figures for us which killed off interest from some clubs abroad for us and that was very shocking,'' Kuffuor told Happy FM

"If they had allowed some of the players to go at a reduced prize at that time the situation could have been better.

"So in the end most didn't get anything really by cashing in on the moves abroad."

He formed a fearsome partnership with three-time goal hero Ishmael Addo and Charles Taylor to make the club an unbeatable side domestically and on the continent.