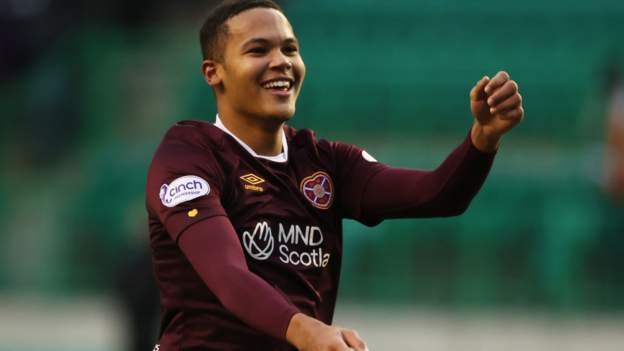 Heart of Midlothian have turned down a bid of around £400,000 from English Championship club Blackpool for centre-half Toby Sibbick.

The 23-year-old is in his second spell at Tynecastle having signed permanently in January 2021 for an undisclosed fee from Barnsley after a previous loan.

But Blackpool's bid falls way short of Hearts' valuation of the player.

Sibbick has played 44 times, all but 12 as starts, for the side sitting third in the Scottish Premiership.

Brentford's Goode joins Blackpool on loanVisit our Hearts page for all the latest news, analysis and fan viewsYou can now get Hearts news notifications in the BBC Sport app - find out more

The Englishman impressed in scoring the third goal - and first for the club - in Sunday's 3-0 Edinburgh derby win over Hibernian in the Scottish Cup fourth round.

Blackpool appointed Mick McCarthy as their new head coach until the end of the season last week after sacking Michael Appleton.

The former Republic of Ireland boss made his first signing on Monday - defender Charlie Goode on loan from Brentford - as he looks to lift his second-bottom side clear of relegation.

Sibbick, who began his career with Wimbledon, had his first loan spell with Hearts cut short after playing just two games when the Covid-19 pandemic ended the Scottish season in March 2020.

After failing to make a single appearance for Belgian top-flight club Oostende in his next loan spell, he returned to play 38 times for Barnsley before being sold to Hearts.