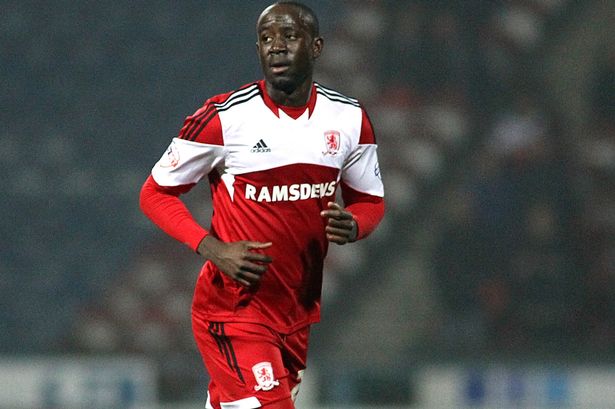 It was a weekend of mixed fortunes for ex-Bristol City pair Marvin Elliott and Albert Adomah.

Midfielder Elliott, who left Ashton Gate at the end of last season, was in jubilant mood after scoring twice for new club Crawley in a 2-0 home victory over Yeovil Town in League One.

But former City fans' favouriteÂ Adomah, who was sold to Middlesbrough in August 2013, experienced an altogether different Saturday afternoon as he was red-carded during the second half of a 0-0 draw at Charlton.

Having already been booked for a 75th-minute foul, the Ghana wingerÂ saw red eight minutes later when he was penalised for a challenge on Rhoys Wiggins.

The sending off completed a bad few days for Adomah, who missed a decisive penalty in a dramaticÂ Capital One CupÂ shoot-out defeat at the hands of Liverpool last week.

But former City team-mate Elliott must have been in seventh heaven after scoring two goals in three minutes to down Yeovil, the club he had trials with during the summer.

Elliott featured in a handful of pre-season friendly fixtures for the Glovers, but manager Gary Johnson declined to offer him a contract, citing concerns over the Londoner's fitness.

How he must have been regretting that decision when Elliott netted in the 57th and 59th minutes at the Broadfield Stadium!