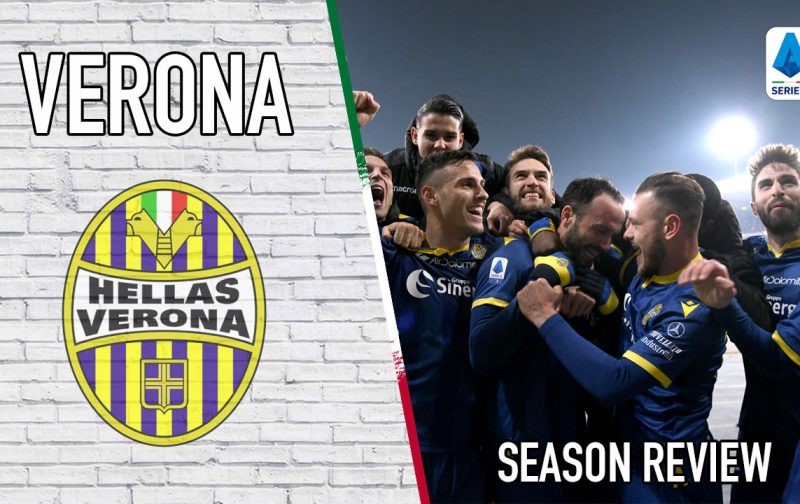 With a stumbling fifth place finish in Serie B in 2018/19 forcing them to gain promotion via the playoffs, Hellas Verona were earmarked by many as relegation candidates before the 2019/20 Serie A season had even begun.

An inauspicious 1-1 draw with Bologna on opening day, in which the Mastini were heavily outplayed did little to suggest the critics were wrong but with a fiery determination they proceeded to pick up results and remained well clear of relegation trouble throughout the season.

In fact not only did they ensure their place in Serie A, but for the majority of the season they were a genuine contender for a Europa League qualification place. Despite falling out of the race after the coronavirus break it was a season that was far more successful than anyone could have imagined, with the Mastini eventually finishing ninth.

Player of the Season: Marash Kumbulla The Gialloblu’s season relied heavily on their defensive solidity and Kumbulla was the rock at the heart of that defence despite only being 20 years old. He dealt with the pressures of Serie A football like a seasoned veteran and showed he could deal with the very best players in the world on more than one occasion.

However, such assured performances mean that the Mastini will struggle to keep the Albania international at the Stadio Marc’Antonio Bentegodi for the 2020/21 campaign, with both Inter and Lazio having already tabled bids for the youngster. The signing of Rrahmani for the mere sum of just over €2 million proved to not only be of fantastic financial benefit to the club, with Napoli paying €14m for him in January, but was a vital addition to their defensive unit.

The 26-year-old became an ever present and dominant figure in the Mastini back line and helped lead the squad in the hunt for a European qualification place. Unfortunately for the Gialloblu with the season now at its conclusion, he will now make the move south to join Gennaro Gattuso’s Napoli revolution. Juric’s first campaign in charge of the Mastini couldn’t have gone better as he led the club to a season well beyond their wildest expectations. Not only were the Gialloblu a solid defensive team but under Juric they played some fantastic free flowing football that, despite lacking the final touch on occasion, proved to be highly entertaining. Juric signed a new three year contract with the club in July which will see him remain in Verona until 2023, and he will be hoping he can replicate his success in 2020/21.

In a season where the Mastini overachieved the memorable moments came thick and fast, but a 2-1 win at home against eventual title winners Juventus in February stands out as their highlight of the season.

The hosts looked to have opened the scoring midway through the first half when Kumbulla sent a header past Wojciech Szczesny, only for VAR to cut the celebrations short due to an offside. So when Cristiano Ronaldo gave the Bianconeri the lead after 65 minutes it looked as if the game would be another hard luck story that ended with the favourites pipping the plucky underdogs to the post.

However, a wonderfully taken goal by Fabio Borini brought the teams level just over ten minutes later and set the stage for a late Verona win. VAR this time came to the aid of the Gialloblu as Leonardo Bonucci was adjudged to have handled the ball in his own box, handing Giampaolo Pazzini the chance to secure a memorable win from the spot. He made no mistake as he drilled his spot kick past Szczesny and sent the home fans into pandemonium. With the Mastini having performed so well on the field in 2019/20 their lowest point came off the field in November when their home clash with Brescia was marred by racist chants aimed at Mario Balotelli. The Brescia striker threatened to walk off the pitch after being subjected to monkey chants from sections of Verona supporters.

The incident led to a Mastini fan receiving a five-year stadium ban and the club was fined €20,000 as well as being handed a one match partial stadium ban. To make matters worse, the club openly denied that any racial chants had been made in the immediate aftermath of the game, despite them being clearly audible to millions of viewers around the world.

Local Verona councillors even pushed for the Mayor to take legal action against Balotelli for defamation. The incident left a sour taste in the mouth for many football fans and cast a shadow over an otherwise exemplary season.