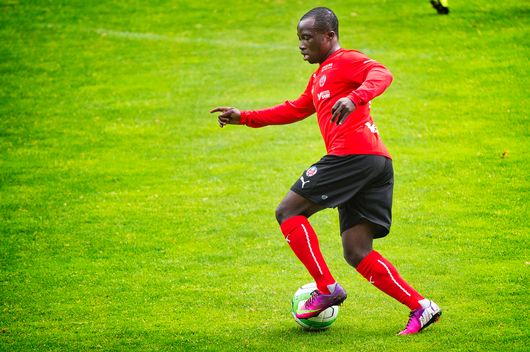 Ema Boateng in action for Helsingborg.

Ghanaian Ema Boateng was signed by Helsingborg in June and scored in an U21 match against Manchester City.Â

"It feels really good. There are nice guys on the team, the coach and everyone else helps me well," says the 19-year-old after Saturday's training.

After signing the contract with Helsingborg, you have scored three goals in two U21 matches.

" I came here to play in the first team, so when I play with the U21, I feel I need to play at a high level and score goals. I think the coaches are happy with what I've done so far.

You played with the senior side against Everton in a friendly and came close to scoring.

It was a good debut, but it would be better if we won. I hope to do more in the upcoming matches.

After his four years of high school and college level in the USA, how do you assess the Swedish League?Â

"Everything is a lot faster here. There is a much higher level than the one I played on the United States.

Boateng has set his sights on playing for stellar clubs including Barcelona, ??Manchester United or any other big club.

I do not put a stamp on my dream, but I want to reach that level as possible for my potential. I always continue to work, listen to the coaches and experienced players like Alvaro, Gashi ... I learn from the guys who have played higher up.

But a concrete goal is to debut for Ghana's national team.

Hopefully Helsingborg is a good step to reach the national team. I think about it, but right now, I focus only on giving this team even more positive stuff.