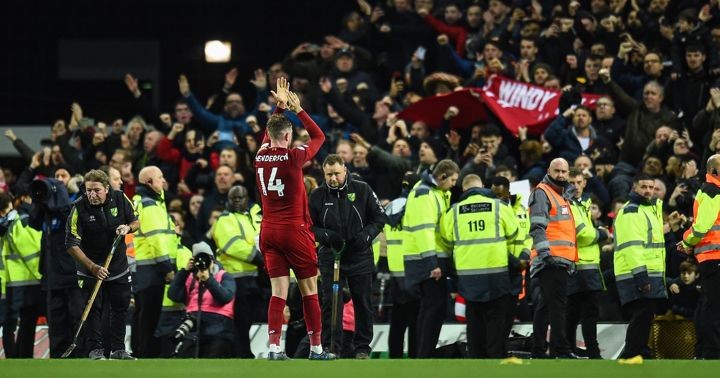 The senior Reds enjoyed two weeks off from their attempts at winning the league title before resuming action at Norwich on Saturday and extending their advantage to 25 points at the summit courtesy of a 1-0 win.

Sadio Mane's second-half strike was enough to edge out the Canaries in what was a hard-fought match in windswept conditions in Norfolk.

After a week off resting and recuperating, Henderson and his team-mates returned to work at Melwood for Monday training, overseen by club chairman Tom Werner who had flown into to Merseyside from Boston.

And the in-form England international was full of praise for how the mid-season break helped him and his colleagues refresh themselves mentally after an energy-sapping campaign so far.

"I feel as though it was a good period for us to refresh for the final push of the season," Henderson said.

"We had a really good week leading up to the game in training, so I thought we felt good in the game. It was difficult conditions for both teams but overall we've got to be delighted with the three points.

"Will they have another winter break next season? I hope so.

"With the amount of games we play every year, to have a period where you can refresh the body and have a final push, especially with the are competitions that we are in, is important for a lot of teams to get that break. "It has worked well so far and hopefully we can continue.

"You can't stop, you never stop but I suppose it is more the mental side of things. We just keep training and keep ticking over, but it is just about staying refreshed mentally for the final push of the season."

Henderson will once again captain a Liverpool team at the Wanda Metropolitano as the Reds resume their defence of the Champions League at Atletico Madrid on Tuesday.

It will be Liverpool's first visit to the stadium since they lifted their sixth European Cup in the Spanish capital back in June, but Henderson insists that won't be part of the team's thinking.

Asked if the venue held special memories for him and his colleagues, the Reds skipper added: "Yes, it will be but it is business as usual.

"We will go there, put on a good performance and hopefully get the result we want. Hopefully it will be happy memories after the game.

"I've not [watched the final back] for a long time, you just move on, you know.

"There will be plenty of time to watch it back in the future, but for us it's just about going forward, improving all the time and focusing on what is ahead not what has happened in the past.

"It will always be in the memory, it is a fantastic stadium but it is back to business. It will be a really tough test, they are a fantastic team so we have got to recover quickly and get ready for that one."