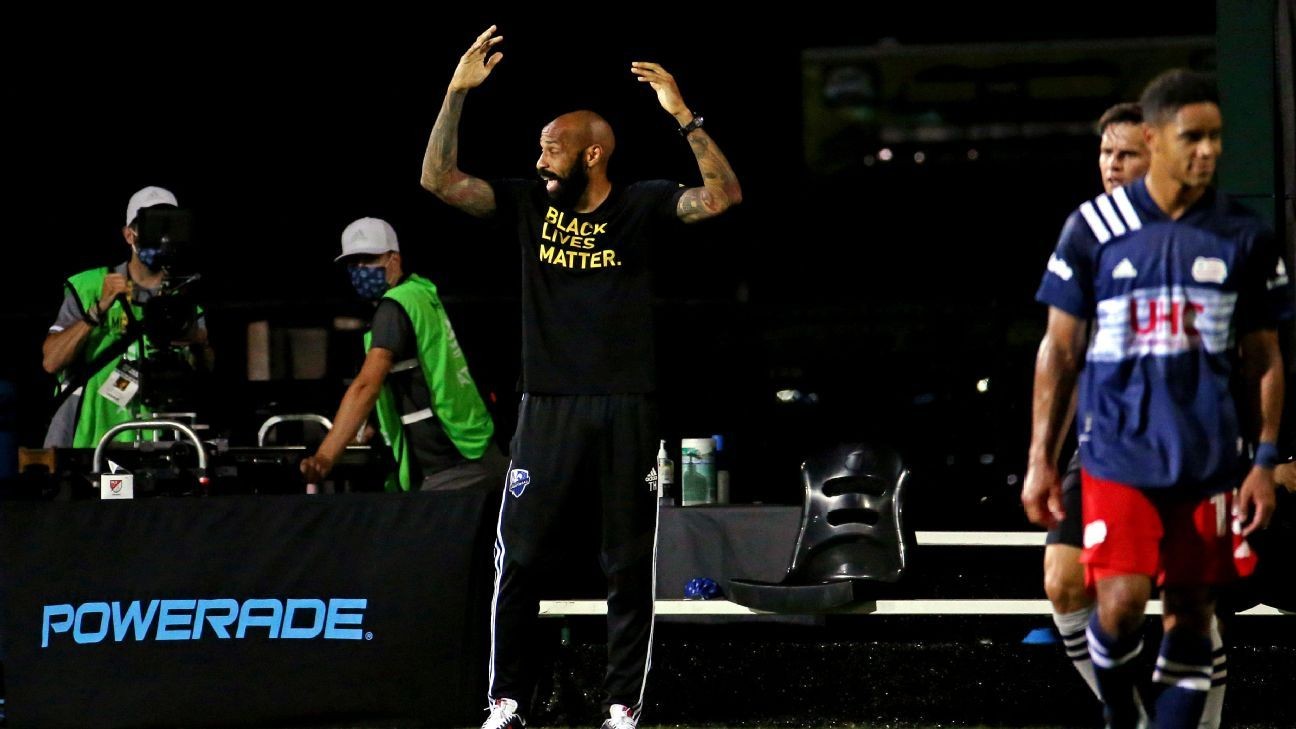 Montreal Impact head coach and France legend Thierry Henry took a knee for the first eight minutes and 46 seconds of his team's MLS is Back Tournament opener against the New England Revolution on Thursday in memory of George Floyd, who was killed in police custody in Minnesota in May, causing mass protests.

Henry, wearing a T-shirt with "Black Lives Matter" emblazoned on it, knelt inside his technical area as the game got underway, in another show of solidarity with the BLM social justice movement over the first two days of play in the MLS tournament.

"I sat down for 8 mins and 46 seconds, I guess you guys know why," Henry said after the match. "It was just to pay tribute and show support to the cause. That was basically it. [It's] pretty simple."

Henry's protest reflected the amount of time it was initially reported that Derek Chauvin, a white police officer, kneeled on Floyd's neck, and 8:46 has become a symbol of police brutality. Minnesota prosecutors said after an investigation that the exact time the police officer had his knee on the neck of Floyd was 7 minutes, 46 seconds.

The former Arsenal legend and World Cup winner has previously been outspoken on racism, launching the Stand Up Speak Up campaign along with other players. He has also been a supporter of Show Racism The Red Card.

"We all have stories that we can tell, but for the first time other ethnicities are involved," Henry told ESPN's Taylor Twellman on Wednesday.

"I always say back in the day, when stuff like that was happening, that I get insulted on the field for the colour of my skin ... I would like other ethnicities in my team to walk out before I walk out, then that would be pretty powerful.

✊🏽✊🏾✊🏿@ThierryHenry took a knee for the first 8:46 in memory of George Floyd. #BlackLivesMatter pic.twitter.com/ddn1TYOu1T

Philadelphia Union players came out for Thursday morning's MLS is Back Tournament match against New York City FC at ESPN's Wide World of Sports Complex in Florida with the names of Black victims of police brutality on the backs of each of their jerseys.

"It was to continue the conversation that needs to be had. We first and foremost asked our team if they were OK with it, because solidarity is key and we want to make sure everybody feels comfortable," Union defender Ray Gaddis said after the match, which his team won 1-0.

"Actions are louder than words. Again, it's to further the conversation and to continue to use our platform to be a voice for the voiceless. It was a collective group effort."

Ahead of the opening game of the tournament between Orlando City and Inter Miami on Wednesday evening, more than 100 Black MLS players raised their right fists and took a knee. Some players wore T-shirts over their jerseys with the words "Black and Proud" and "Silence is Violence," and both teams' starting players, as well as the referees, took a knee before kickoff.

The kneeling protest garnered national and worldwide attention in 2016, when former San Francisco 49ers quarterback Colin Kaepernick in 2016 carried it out during the national anthem. The fist raising mirrors the protest against racial inequality by Americans John Carlos and Tommie Smith at the 1968 Olympics in Mexico and came to be associated with the Black Power movement of the 1960s and '70s as well as the current Black Lives Matter movement.

The MLS tournament is being held inside a biosecure "bubble," with MLS the first major North American men's team sport to return to action since the coronavirus pandemic suspended the sports calendar in mid-March.