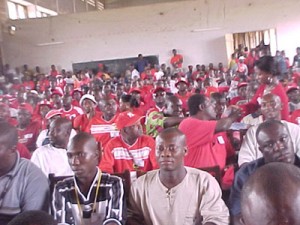 Ex Kotoko chairman Herbert Mensah says the club will raise more than enough money to pay off its debts only if the supporters believe in the current administration.

The record Premier League holders face a 30-day ultimatum to pay off recently incurred FIFA fines or risk getting relegated to the third tier of Ghanaian football.

It is also to make refunds of $6,500 toÂ TurkishÂ side GencelrbirligiÂ over the transfer of Adamu Mohammed in 2008 while payingÂ Â a combined amount of $50,000 to Tamale Real Republicans for the sale of Shilla Illiasu in 2006.

The club have thus launched a massive fund raising project to have mainly supporters and sympathizers contribute monies to service the debts.

But Mensah who presided over a relatively fruitful period of the club through the early 2000's says the contribution of only supporters will be all the club needs but only if they trust and believe inthe administration led by Dr. K.K Sarpong.

"What I know is that the club is bigger than anybody, definitely bigger than any director, chairman of the club. The club will always outlive anybody and the most important people in Kotoko are the supporters," he told Kumasi-based Kessben FM.

"The wisest people in Kotoko are the supporters and if the current management learn, understand and involve the supporters who in tend also trust and believe in them then this should not be a problem at all.

"I quite remember I had a similar problem and we had to appeal to the people of Ghana and the amount we got far out-weight the liability. So if they believe in you they will definitely raise it.

"It is a difficult period but if you have the love and support of the supporters who have a lot of passion for the club and you take their suggestions, they will fill the stadiums, they will meet you on the streets, they will contribute. That is Asante Kotoko for you.

"From the grassroots to the top. And like I said the wisest person in Kotoko is the supporter not the chairman.

"If you want to know what is going on, if you have the humiity to listen to them, they will tell you things that will shock and educate you so they are absolutely key in the fight."

The club have already revealed it will be using its quota from the league's sponsorship package (about $40,000) as down payment for the debt of Hans Dieter Schmidt.