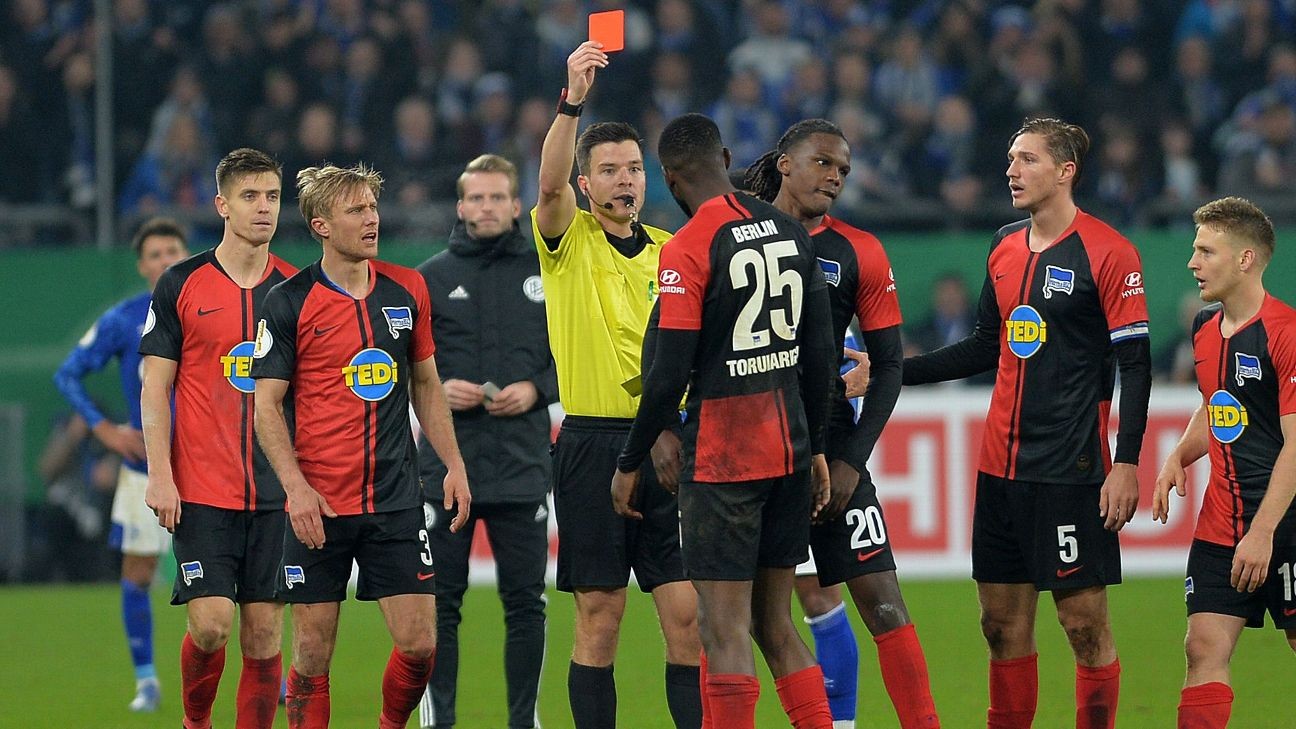 Hertha Berlin defender Jordan Torunarigha was sent off for an emotional reaction in the DFB-Pokal defeat at Schalke on Tuesday only minutes after club officials informed the referee of racial slurs against the 22-year-old.

Schalke bounced back from a two-goal deficit to reach the German cup quarterfinals in extra time with a 3-2 win against Hertha. But the victory was overshadowed by a racist incident in the stands of the Veltins Arena.

In the second half, Hertha defender Torunarigha was reportedly subjected to monkey chants from the Schalke supporters. Although the incident has yet to be confirmed, pictures show the 22-year-old visibly affected and comforted by his teammates.

Torunarigha was shown a second yellow card by referee Harm Osmers 10 minutes into extra-time when he was pushed into Schalke coach David Wagner. As he got up, he up threw a crate of water to the ground.

"Before extra-time, Jordan informed us that he was racially abused," Hertha coach Jurgen Klinsmann told Sky Deutschland after the match. "I feel sorry for Jordan. You just don't do that.

"We tried to calm him down, we asked the referee to protect the player and when this foul came you must show sympathy for his situation. But the opposite was the case."

FIFA introduced the three-step procedure against racist incidents in football ahead of the 2017 Confederations Cup. It allows referees to stop the match for an announcement in the stadium, then to suspend and finally abandon it.

Peter Sippel, a former referee working for the German FA, told outlet sportschau.de that there was too much time between the incident around the 70th minute and the break before extra time to have the right "context" for an announcement.

Although informed about the incident by Hertha officials, referee Osmers did not initiate such an announcement and played on. The player was then sent off only minutes later.

"Jordan is a very emotional player," Hertha defender Niklas Stark said. "But what is coming from the terraces, monkey chants and racist abuse, I am sorry, I can't even imagine it.

"It's a complete no-go, and it would partially explain what happened later [the sending off]. The squad, as a club, the whole Bundesliga must get behind him."

Schalke attacker Benito Raman said that Torunarigha "cried on the pitch and wanted to stop."

Schalke have said there is "zero tolerance for this behaviour in our club" and added they will do all they can do identify the perpetrator.

Sporting executive Jochen Schneider told reporters on Tuesday he had "no sympathy for those complete idiots."

The German FA have confirmed an investigation into the incident has been opened.