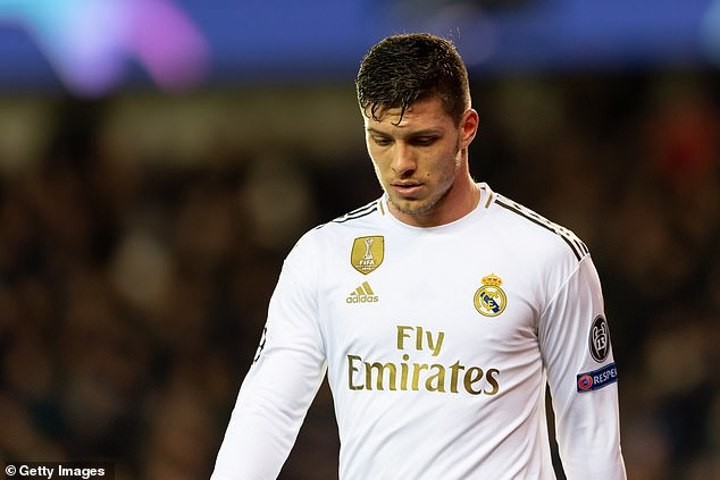 A former coach of Real Madrid flop Luka Jovic is less than impressed with the striker's antics, as the Serb finds himself in hot water after flouting the coronavirus lockdown to visit his girlfriend.

The forward's time at the Bernabeu has got off to a poor start after his £54m summer move from Eintracht Frankfurt, netting just twice and falling out of favour with Zinedine Zidane.

He was left out of the Madrid squad entirely for the Spanish giants' last three La Liga fixtures, a run interrupted by the coronavirus crisis shutting down the league.

Rather than hunker down in isolation like his colleagues, Jovic then flew back to Serbia to visit his pregnant girlfriend Sofija Milosevic.

The 22-year-old is now under investigation and could face jail time, putting his future at Madrid in doubt after only a year and frustrating his old Frankfurt coach Dragoslav Stepanovic.

'He is the only man who does 100 per cent to ruin his career,' Stepanovic told Kurir.

'Jovic works against himself. He was lucky that Adi Hutter gave him a shot at Eintracht and then made the biggest transfer in Serbia's history and went to Madrid. I can't believe what the boy is doing to himself.

'I read the media in Serbia and I know what life he had, that as a child he slept in his car with his father to wait until morning to train.

'What a sacrifice he made, and then this. I don't know, Luka obviously doesn't think about himself.

'When they tell you it's a ban (self-isolation) you pretend you didn't understand anything. You better shut up, don't talk. I can't believe he did something like this.'

Jovic caught the eye by bagging 27 goals and providing seven assists as Frankfurt finished an impressive seventh in the Bundesliga last term, qualifying for the Europa League.

However, he could be set for an early exit from Zidane's squad, with Chelsea and Arsenal targeting him.