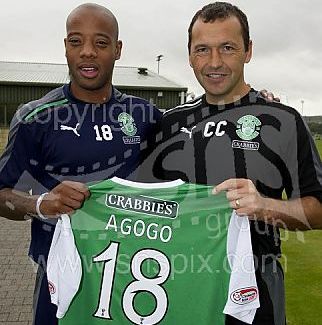 Calderwood and his team will enter the clash with Hearts on the back of three losses from four SPL matches this season, and additional firepower in attack would be a welcome boost to an Easter Road side that has so far plundered just three league goals.

Agogo has played just 45 minutes since arriving at the Capital club, sitting out the majority of action due to a thigh injury.

Now that problem is beginning to subside, Calderwood is ready to pitch the 32-year-old Ghanaian striker into the Hibs attack at Tynecastle.

"He is running and he is getting involved in a bit of ball work," Calderwood said of Agogo. "Would I like him involved at the weekend? Yes, I would.

"Would I rather have him involved for the rest of the season? I definitely would."

The recently returned Akpo Sodje and Garry O'Connor led the line against Berwick Rangers on Tuesday, both scoring in a 5-0 win over the Third Division side.

While Sodje could start against Hearts, on loan Newcastle striker Phil Airey is unavailable following an injury he picked up in training.

Just over a fortnight ago, Hibs had available only one fit striker in O'Connor, but now Calderwood has an important call to make on which of forwards will play this weekend. Agogo is certainly at the forefront of the manager's thoughts.

"We've got to make a judgment towards the end of the week whether we put him in," said Calderwood.

"Akpo (Sodje] will be way ahead of Junior now in terms of fitness and we have to take that into account."