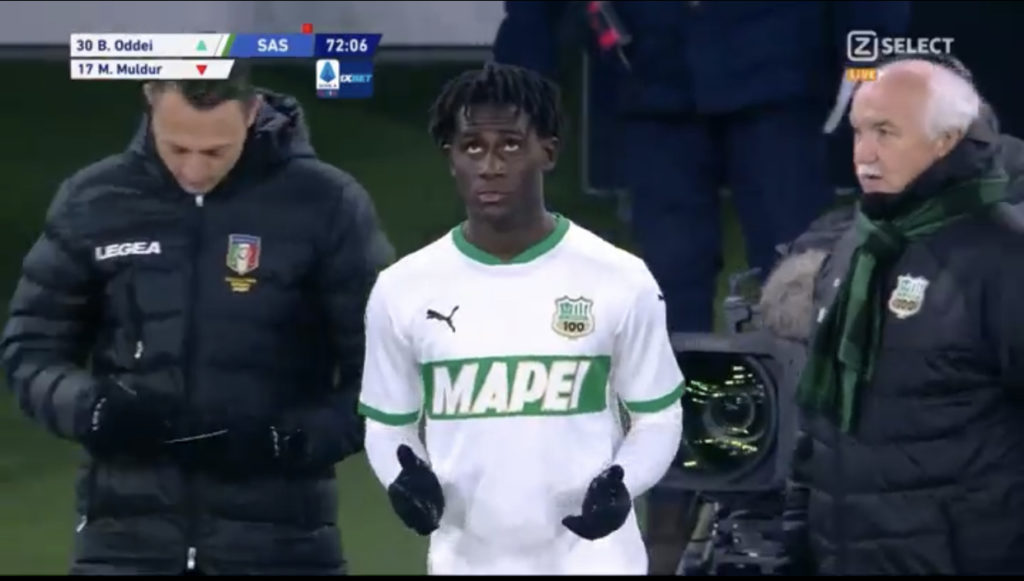 Teenage sensation Brian Oddei had a debut to cherish for US Sassuolo in the 3-1 loss against Juventus on Sunday.

Oddei, 18, was rewarded with his fine form in the second team with a selection into the first team for the encounter against champions Juventus.

It was second time the highly-rated teenager has been included in the Neroverdi’s matchday squad.

He earned his maiden call up for the game against Hellas Verona last November but missed out on the final squad.

The Italy-born Ghanaian budding forward made a surprise inclusion in the match when he replaced Murt Muldur in the 73rd minute.

Oddei gave a wonderful account of himself with some delightful display.

At some point in the game, Oddei became the live wire for Roberto de Zerbi’s men with his movement and trickery.

Danilo Silva gave Juventus the lead against a ten-man Sassuolo after Pedro Obiang had been given his marching orders for a dangerous tackle on the stroke of half time.

Gregoire Defrel pulled parity for the visitors with a fine goal in the 58th minute.

But the Bianconeri regained their lead deep into the match through Aaron Ramsey.

Portuguese super-star Cristiano Ronaldo put the game to bed with a low strike in the 92nd minute.

Oddei, who was a joy to watch, could be given another opportunity when Sassuolo take on SPAL in round 16 of the Coppa Italia on Thursday.