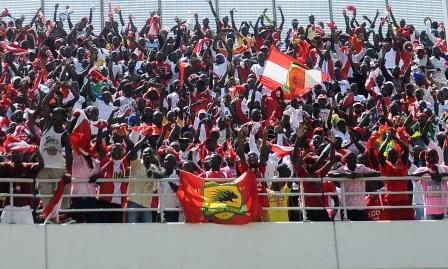 Soccer historians say it was through the initiative of that great English football enthusiast, Ken Harrison, the Ghana Manager of R.E.Harding and Co that Aspro Nicholas Ltd of England donated the ASPRO Cup for the beginning of the FA Cup competition.

Ken Harrison was also reported to be closely associated with arrangements for the visit to Ghana of English soccer maestro Stanley Matthews in 1957.

He was a guest football commentator for Radio Ghana. He loved colts football to the hilt.

The first round which was all local derbies saw Hearts winning from Accra, Kotoko from Kumasi, Hasaacas from Sekondi and Dwarfs from Cape Coast.

Thus the stage was set for a great battle between the nationâ€™s two greatest crowd pullers, Kotoko and Hearts, to battle for the Cup on March 30, 1958.

It was an exciting game from start to finish and Kotoko won 4-2 to become Ghanaâ€™s first FA Cup winners.

Trailing 0-2 at one stage of the game, Kotoko scored four astonishing goals in a dramatic finish to carry the day.

By the 30th minute Hearts were two goals up through speedy right winger Ofei Dodoo and inside forward C.K.Gyamfi but nimble footed left winger Mohammed Salisu reduced the arrears for Kotoko just before the recess.

King of wingers Baba Yara got the equalizer for Kotoko from a spot kick a few minutes after resumption. Play was then even until the last five minutes when the drama began. Inside forward Kwakye put Kotoko ahead in the 85th minute and play maker Asebi Boakye made it 4-2 on the stroke of full time.

The Aspro Cup was replaced the following season with the Football Association Cup and incidentally another Kumasi club, Cornerstone, were the first winners of the new trophy. Interestingly Cornerstone won the cup without kicking a ball in the final.

What happened was that a few days to the Cup final, their opponents Sekondi Hasaacas, were suspended by the League Management Committee for four months for refusing to play a charity match against Asante Kotoko in aid of the Founderâ€™s Day Appeal Fund.

The League Management Committee was a creation of Sports Director Ohene Djan.

Â In place of the Cup Final a ceremonial match was arranged in Kumasi between Cornerstones and Asante Kotoko for the presentation of the cup. Kotoko however spoiled the occasion for Cornerstone by beating them3-1 but Cornerstone were happy to collect the cup all right.

Since the Hasaacas episode a few noteworthy events have characterized subsequent the cup finals.

Â  Model club Real Republikans, the brainchild of Sports Director Ohene Djan formed in 1961, have the record of winning the FA cup four times in a row.

Â In their first triumph in the 1961/62 season they had to play Asante Kotoko three times before winning the cup 2-1. The first match was goalless and the second 1-1.

Republikansâ€™ third FA Cup triumph was in the 1963/64 season when they beat Great Ashanti 3-0. The fourth triumph was in 1965 when they shared honours with Cornerstone. The two teams drew 1-1 on two occasions and after the second match the GFA took the easy option of declaring them joint champions. Accra Stadium had no floodlights at the time

The 1966 competition was cancelled at the quarter final stage by the then Commissioner for Sports A.K.Deku who might have foreseen the imminent collapse of the tournament

Earlier Asante Kotoko and Cornerstone had quit the tournament because of a big unemployment problem that had hit the clubs. At the time most of their players were in state owned organizations, like the Farmers Council and the Workers Brigade and had been laid off in the wake of political changes in the country- the 24th February Coup dâ€™etat that toppled the Dr Kwame Nkrumah administration.

Â The 1970/71 competition also faced a similar fate. It was abandoned at the semi-final stage following a surprise decision of the GFA to enter Accra Great Olympics, then league champions for the 1971 African Club championships contrary to the Associationâ€™s earlier pronouncement.

The clubs had earlier been told by the FA that the champion of champions i.e. the winner of a super match between the league and the FA Cup holders would qualify to represent Ghana in Africa

Accra Great Olympics and Hearts had drawn 1-1 in the FA Cup quarter-finals on Feb 14 1971 and were due to replay on Feb 21, when the GFA took that fateful decision which spelt the doom of the competition. It was later learnt that the GFA was getting late in registering for the African clubs series hence their decision to submit the name of the league champions which was Accra Great Olympics.

It took the GFA two years to organize another FA Cup competition. That was in 1973 and the final between Accra Hearts of Oak and â€œTroublesomeâ€ Akotex provided a lot of excitement. In fact there were two matches. The first match ended in a dramatic 6-6 affair after the penalty shoot-out. Full time scores were 2-2 and both teams scored four goals in the first round of the penalty shoot-out.

Â A replay was ordered the following week and Hearts won 2-0.

Not much was recorded about subsequent Cup Finals till 1978 when Asante Kotoko made it a one- way traffic by trashing Tarkwa Gold Stars 7-0. Kotoko so dominated the game that in the dying minutes they decided to toy with their opponents by withdrawing front runners like Opoku Afriyie and Abdul Razak to play in the defence

Seven years later, Kotoko were to be paid back in their own coin when they were humiliated by Sekondi Hasaacas in the 1985 Cup Final. The score 3-0 was not as heavy as the one they dished out to Gold Stars in 1978 but Hasaacasâ€™ domination of the game was total. Budding national star Ollabode Williams could hardly be handled by the Kotoko defence and he made the Porcupines look like novices.

A Cup Final between Hearts of Oak and Asante Kotoko is always a special treat and this was what fans were served with in the 1990 Cup final. Kotoko won 3-2 to make it a hat-trick over Hearts following the 1958 and 1960 victories.

In 1992, for the first time in the history of the competition two unsung clubs, Ho Voradep and Kumasi Neoplan Stars reached the cup final.It was most unexciting match and Voradep won 2-1.

Â Three years later Goldfields made history by being the first club to win the cup via the penalty shoot-out. The Miners beat Cape Coast Dwarfs 4-2 on penalties after a goalless draw at regulation time.

The hero of the day was Goldfieldsâ€™ international goalkeeper Simon Addo who saved two of the penalty lottery.

Â In 1995 Cape Coast Mysterious Dwarfs missed the chance of a third time in a row Cup final appearance when they quit the competition after beating Great Olympics 5-4 on penalties in the semi final. Full time score was 2-2.

Â Dwarfs gave no official explanation for their action but observers felt they wanted to concentrate on the WAFU Cup assignment against Africa Sports of Cote dâ€™Ivoire. Dwarfs however did not fare well in the WAFU Cup and were eliminated at the 1/8th stage by Africa Sports who won 1-0 in Accra on Sunday July 9. Incidentally it was an own goal by Justice Abban that spelt the doom of Dwarfs. The Oguaa boys had earlier held Africa Sports to a 1-1 draw in the first leg match in Abidjan.

Following Dwarfs FA Cup final withdrawal, the GFA ordered a play off between Great Olympics and Goldfields who had been beaten 2-0 by Dwarfs in the quarter finals.

Â Olympics beat Goldfields 3-0 in Kumasi in a match generally described as sub- standard. Goldfields were reported to be extremely casual presumably because they had already won the league title

Â A grateful Great Olympics went on to beat Hearts 1-0 and win the FA Cup for the third time.

The 1996 season saw Hearts of Oak in their third FA Cup in a row. The Phobians beat Ghapoha 1-0 in a replay through rising star Owusu Afriyie to recapture the cup they won in 1994 when they beat Dwarfs 2-1.

Â The first match on Republic Day was abandoned midway through the second half because of poor visibility. The Accra Stadium didnâ€™t have floodlights at the time.

The 1998 Cup final between Kotoko and Real Tamale United which Kotoko won 1-0 was the 30th since the championship began in 1958.

Hearts of Oak crowned a successful decade of brilliant football by winning the 1999 and 2000 editions in style. They beat Olympics 3-1 in 1999 and Okwawu 2-0 in 2000 to make it a record nine FA Cup triumphs

Â The last FA Cup in 2001 fittingly went to Hearts close rivals Asante Kotoko who beat city rivals King Faisal 1-0 to make it the 8th win, one behind Accra Hearts of Oak.

Â The FA Cup has its special attraction since it brings all clubs in the various divisions on the same stage. Nine years in the wilderness is quite a long time and it is no wonder that with the massive support from Communications Giants MTN this unique knock- out competition has been given its rightful place on the National football calendar.Â Â Â