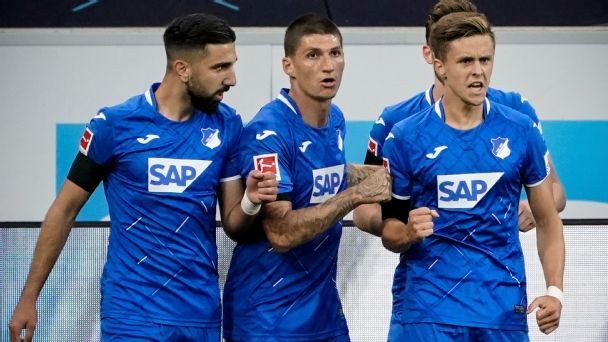 Hoffenheim are in contention for European play after a win over Cologne. Getty Images

Hoffenheim snapped a seven-game winless run in the Bundesliga with an entertaining 3-1 victory over visitors Cologne on Wednesday as both teams ended the game with 10 men and the hosts moved back into European contention.

The win lifted Hoffenheim into seventh place on 39 points with six games left in the season which restarted 11 days ago after a break of more than two months due to the COVID-19 pandemic. All matches are played without spectators to minimise the risk of infection.

Christoph Baumgartner scored early in each half to give Hoffenheim a two-goal lead with Cologne a man down after Sebastiaan Bornauw was sent off with a red card for a violent challenge in the 26th minute.

Steven Zuber added a third in the 48th but the numerical balance was restored when Benjamin Huebner got his marching orders following a second booking for a clumsy foul on Cologne's Dominick Drexler two minutes later.

The visitors pulled a goal back through Florian Kainz's deflected shot on the hour and could have scored again but Mark Uth's penalty was saved by Oliver Baumann.