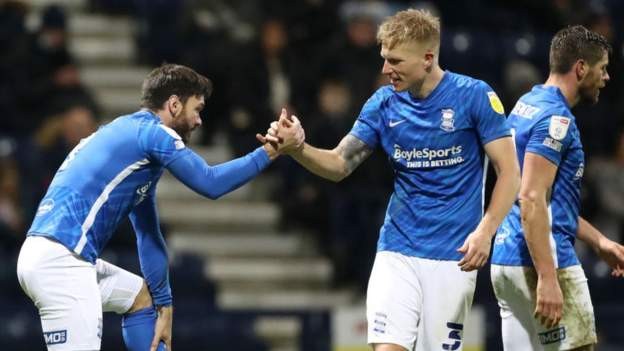 The hosts took a deserved lead when Alan Browne drilled a low shot which Patrick Bauer got a touch to on its way into the bottom corner.

And Hogan met a Ryan Woods cross at the near post to head in an equaliser just a few moments after coming off the bench.

It was just a third league game for Lowe since his appointment on 7 December after a string of Covid-related postponements, and his side were good value for their half-time lead.

Blues had their best chances either side of the break as Gary Gardner volleyed over when found unmarked by Jeremie Bela's corner, before Jordan James' goalbound strike was deflected behind after he was teed up by Norwich loanee Onel Hernandez.

The Lilywhites threatened on the break as the visitors pushed for an equaliser and grabbed a point when Hogan struck with only City's fourth goal in their past 10 away trips.

Both sides went close in stoppage-time, Etheridge keeping out Bauer's header before Gardener steered a shot wide from six yards.

Preston drop to 15th, while Birmingham are without a win in six matches and remain 18th.

"I have to give the players full credit for keeping going and pushing to the end like that. We could have nicked it in the end.

"I thought from the second half we looked the most likely to score. They hit us on the break a couple of times which was obviously going to happen because we we pushing for the equaliser.

"I'm really pleased because Scotty [Hogan] has had a tough week with some personal things going on away from the game so I'm glad he got the goal."

Attempt missed. Lukas Jutkiewicz (Birmingham City) header from the centre of the box is close, but misses to the right. Assisted by Ryan Woods with a cross following a set piece situation.

Scott Hogan (Birmingham City) wins a free kick in the attacking half.

Attempt missed. Alan Browne (Preston North End) header from the centre of the box misses to the left. Assisted by Tom Barkhuizen with a cross.

Attempt saved. Patrick Bauer (Preston North End) header from the centre of the box is saved in the bottom left corner. Assisted by Benjamin Whiteman with a cross.

Goal! Preston North End 1, Birmingham City 1. Scott Hogan (Birmingham City) header from the centre of the box to the top right corner. Assisted by Ryan Woods with a cross.

Attempt blocked. Marc Roberts (Birmingham City) header from the centre of the box is blocked. Assisted by Jérémie Bela with a cross.