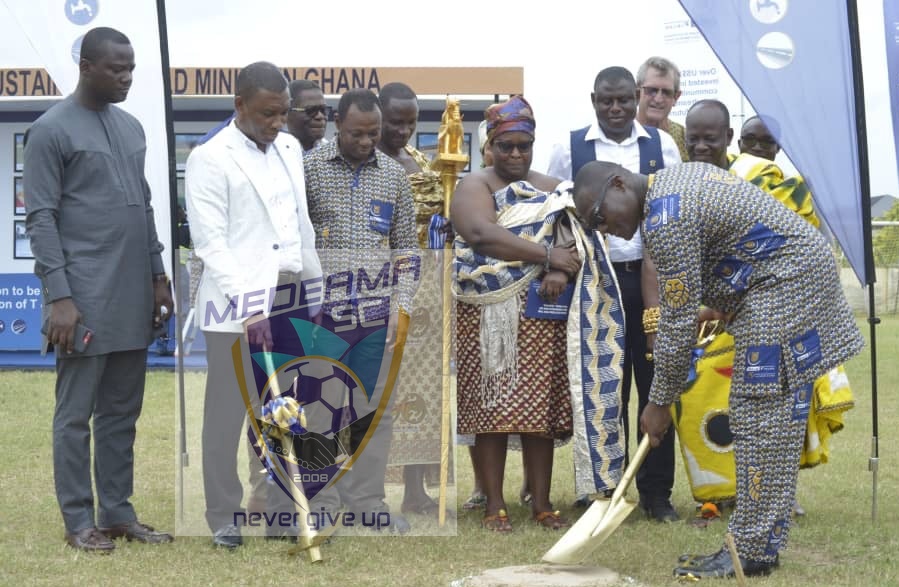 Alfred Baku cutting sod for the construction of a $13m 10,000 seater stadium in Tarkwa

Goldfields, Tarkwa-Damang has won hearts and minds with the impending construction of a $13m 10,000 seater capacity stadium amid a sustained sponsorship for Medeama Sporting Club driving the giants mining company.

Executive Vice President and Head of West Africa, Alfred Baku is leading a charge to transform the old mining town into a football hub.

Goldfields have been instrumental in the successful drive of Medeama, pumping in millions of dollars to drive the ambitious Ghanaian side over the past decade.

The mining firm has been instrumental in the driving juggernauts in the development and promotion of the game in the Western region of Ghana.

Alfred Baku, who is an alumni of the University of Mines and Technology (Umat), is given back to society by spearheading the redevelopment of the Tarkwa NA Aboso park.

His remarkable leadership and direct involvement in getting the multi-national company to inject capital into the construction of the edifice has been hailed and one which will linger on the minds of the chiefs and people of Tarkwa for eternity.

The new stadium will be a major boost for the players, coaching staff and the people of Tarkwa.

It will help to attract and retain talents as well as providing an excellent base for community engagement and footballing excellence in the Southern part of Ghana that will inspire future generations.

Goldfields have not relentless in their resolve to keep faith with the people by continuously supporting their biggest and enviable brand - Medeama Sporting Club.

Through the instrumentality of Alfred Baku and his Goldfields, the Mauve and Yellows have clinched two FA Cup crowns and played in the CAF Confederation Cup on two occasions in just nine years of existence.

It's been a remarkable feat for the Tarkwa-based side, who are touted as an emerging clout on the African continent.

The realisation of a first class facility for Medeama and other clubs in Tarkwa will remain in the hearts and minds of the people of the mining town for many, many years.

Medeama is the most successful team in the Western region after winning the FA Cup twice.

Goldfields have provided an insight into sponsorship as a bonafide marketing discipline and demonstrated ability to win consumer hearts and minds at the same time delivering community benefit.

In the midst of the pump and pageantry, the unsung hero in the exciting soap opera is the Executive Vice President and Head of West Africa for Goldfields Alfred Baku.