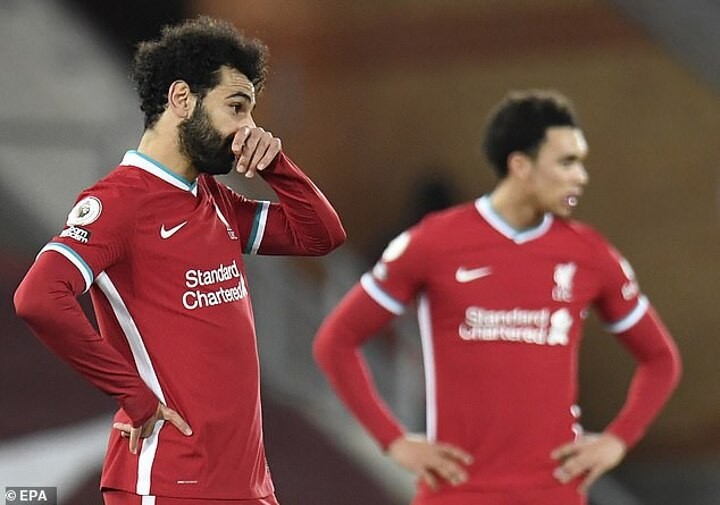 The most open Premier League title race in recent years took another shocking turn on Thursday night when Liverpool were beaten by Burnley at Anfield – ending a 68-game unbeaten run at home for the reigning champions.

The top six teams in the table are so tightly bunched with just eight points separating first from sixth. And for the first time in a couple of years, Liverpool find themselves fighting to stay in the top four after a poor run of form that started just after Christmas.

The title race is well and truly open and top spot is there for the taking but it remains to be seen who has the nerve to hold on to it when it matters.

So who are the contenders and what are the arguments for and against each team from winning the title?

Here Sportsmail breaks down the top six teams and addresses just how strong their title bid is having entered the second half of the season.

Somehow, someway, Ole Gunnar Solskjaer has completely transformed this United squad and made them into title challengers. It was only a couple of months ago that fans were calling for his head following a poor run of form that saw them dumped out of the Champions League.

It's credit to United that they've turned things around, largely thanks to the impact of Bruno Fernandes who has won four Player of the Month awards since arriving a year ago. The Portuguese star has been crucial to firing United to the top of the table, while Paul Pogba, Fred and Scott McTominay have all stepped up in recent months.

The Red Devils are also yet to lose away from home this season, having amassed 26 points from 10 away games so far.

They also have a proven goalscorer in Edinson Cavani to help ease the burden on Marcus Rashford and Anthony Martial's shoulders, which could prove to be vital in the second half of the campaign.

While United do boast the best away record in the division, they are yet to be tested by any of the traditional Big Six, bar Liverpool. They did pick up a good point at Anfield but their title credentials will really be examined when they face City, Spurs and Chelsea away from Old Trafford later on in the season.

There is also the worry that Solskjaer could become too reliant on Fernandes as the season goes on, while a fear of burnout for Harry Maguire, Aaron Wan-Bissaka and Rashford could be the Norwegian boss' downfall should he refuse to rotate in the coming weeks.

United do currently sit top of the table at the time of writing, but it remains to be seen if they can continue their good form and hold off the five other title contenders as we reach the business end of the season.

The arrival of Cavani has addressed Solskjaer's need for an out-and-out goalscorer but what the Norwegian boss will be looking for is another defensive midfielder. Nemanja Matic is 32 and his long-term successor with be a priority for the club.

Pep Guardiola may have thought a new signing had arrived but Manchester City have certainly got their mojo back and have managed to grind out results despite the ongoing injury crisis at the club.

They've been superb at the back with the acquisition Ruben Dias last summer while John Stones' resurrection has come at the perfect time for the blue side of Manchester.

The former champions still have the ability to steamroll teams and have strength in numbers to carry them through to the summer.

After a jam-packed campaign last season that saw them win just the Carabao Cup, City came into this season without a pre-season, resulting in their slow start and continued bad luck with injuries.

Sergio Aguero announced earlier this week that he has tested positive for Covid, which will see him out of action for at least another few weeks, adding on to his ongoing injury woes that have kept him out for large parts of the season.

Gabriel Jesus has also been unable to fill the void left by Aguero with his own injury and illness issues, leaving Guardiola to play Raheem Sterling and Kevin De Bruyne as false nines.

And speaking of De Bruyne, he's set to for a lengthy spell on the sidelines with a hamstring issue and will likely miss City's season-defining clashes with Liverpool and Spurs next month.

They need a striker. Desperately. Aguero cannot be relied upon while Jesus is proving to be hit and miss. A long-term replacement for the talismanic Argentine is a must.

Brendan Rodgers has done a wonderful job since taking the reins at Leicester City and has transformed the Foxes back into title contenders after years of chopping and changing managers since their title win in 2015-16.

Rodgers is really getting the most out of his young squad, with players like James Justin, Wesley Fofana and Harvey Barnes all shining bright in what has been a solid first half of the campaign for the Foxes.

Unlike last season, Leicester have the squad depth to cope with what's ahead of them while evergreen Jamie Vardy has kept pace with the league's other great goalscorers in the race for the Golden Boot.

Leicester have often come unstuck against teams that invite pressure onto themselves, with the Foxes most effective when they counter teams.

Their 5-2 win against City earlier in the season was the perfect example of how they can dominate games when they don't have the ball but have slipped up against the likes of Everton, Fulham and West Ham when they do.

Their late-season collapse after Project Restart could also come back to haunt them, given they started last season so well, too.

Rodgers will be keen to bring in another centre back to the club given the large number of centre-half pairings he's had this season. Wilfried Ndidi has even played in the backline, while Wes Morgan doesn't have many more years at the top level in him.

They are the reigning champions for a reason. While they're suffering from their first blip in what seems like forever, Jurgen Klopp's men are 'mentality monsters' and it is surely a matter of 'when' rather than 'if' they return to top form.

While their injury problems are well-documented, the Reds have coped very well with the absences of centre-back pairing Virgil van Dijk and Joe Gomez up until now and remain in the title hunt with a number of key men missing.

Their front three are unmatched, and while Sadio Mane is the only player to have scored in the Premier League since Christmas, it would be foolish to write Liverpool off at this stage. Expect them to bounce back very soon.

Their shock defeat by Burnley last Thursday was their second defeat in three games and they are now without a win in five.

They've only scored one goal in that run and are in desperate need of a confidence boost. Trent Alexander-Arnold has completely gone off the boil in recent weeks while Mohamed Salah has been criticised for his 'selfish' play and one-minded approach.

Klopp's usually-ruthless men need to get that killer instinct back, and quick, if they want to stay in touch of both Manchester sides.

The Reds are in desperate need of a centre back with still no concrete return in sight for both Van Dijk and Gomez. Klopp's cannot rely on Jordan Henderson and Fabinho to keep filling in there if they are to defend their title.

It was only a few weeks ago when Spurs and Liverpool had their top of the table clash at Anfield, which the Reds came out on top in thanks to a Roberto Firmino header in the dying seconds.

While it was a disappointing result, the disappointment not to walk away with any points showed just how far Tottenham have come since Jose Mourinho took over from Mauricio Pochettino in November 2019.

The Special One has transformed Spurs into a team challenging for the top honours again and has the league's most lethal finishers in Harry Kane and Son Heung-min leading the line for him.

Tanguy Ndombele is also a man transformed this season and Mourinho now has all the ingredients to put his invaluable experience to good use and finally end Spurs' trophy drought.

While there has been a mentality shift in north London, Spurs still have some work to do when it comes to seeing out games.

Spurs have dropped a staggering 10 points from winning positions this season, with eight of the 17 goals they've conceded coming in the final 15 minutes of play.

Kane has even admitted that it is a mentality issue in the squad and should they not correct it, they will find the gap to the league leaders getting larger and larger.

Tottenham are the odd ones out here because, if anything, they need to get rid of players rather than bring reinforcements in. Mourinho has a large squad and is doing his best to rotate but players like Dele Alli have been left to sit on the sidelines. Spurs also don't have many notable injury issues and have plenty of depth all over the field so it would be wise to let a few players go.

Everton are currently eight points adrift of leaders Manchester United in sixth but have two games in hand. Should they win both games, they're right back in the mix.

The Toffees are on a good run of form too as of late, having won four of their last five Premier League games.

The arrival of Carlo Ancelotti and James Rodriguez has turned Everton into real contenders and they now have a nice blend of youth and experience to help them push for silverware.

Having turned Dominic Calvert-Lewin into one of the league's best poachers, Ancelotti is proving his worth while he is also able to adapt given the number of injury issues the squad currently has.

Calvert-Lewin is on fire this season with 11 Premier League goals and is keeping pace with Vardy, Kane and Salah in the race for the Golden Boot.

However, one of the Toffees' main downfalls is their lack of depth up front with Cenk Tosun the only other recognised centre forward at the club.

And those aforementioned two games they have in hand could actually go against them, with both games postponed due to Covid outbreaks at other clubs.

With an already-packed schedule and now having to slot two more games in somewhere, Everton will need to be at their best to keep pace or face dropping out of the race like Spurs.

The Toffees need a new striker that is happy to play back-up to Calvert-Lewin. Should anything happen to the Englishman, Ancelotti will need another striker to rely on and Tosun doesn't appear to be that man.