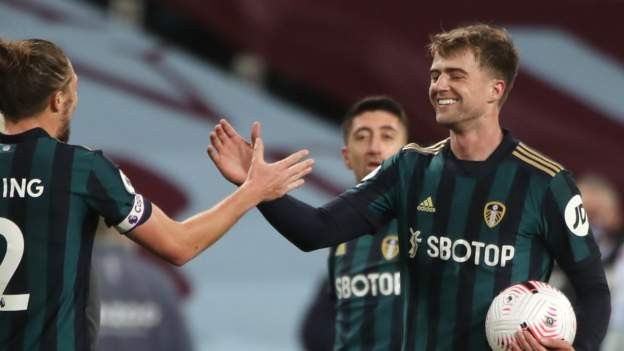 Leeds United and their striker Patrick Bamford both know a thing or two about being written off.

Bamford was once a teenage wonderkid on the books of Chelsea, but he had not kicked a ball in anger in the Premier League for three years before this season.

Leeds had to endure slightly longer away from the top flight - 16 years in fact - during which they lurched from one crisis and false dawn to the next until Marcelo Bielsa came along and marched them back into the big time.

But the doubters remain. Just this week, former Aston Villa striker Gabriel Agbonlahor described Bielsa's side as a "myth" on Talksportexternal-link and said teams would "find them out".

On Friday, though, both Leeds and Bamford demonstrated that there is far more substance to them, with the striker netting a hat-trick as his side put Villa, the division's in-form side, to the sword.

Bamford has now scored six goals in six games for Leeds this season.

Before that, he had scored just once in 27 top-flight appearances during loan spells away from Chelsea at Crystal Palace, Norwich City, Burnley and then permanently at Middlesbrough.

But Bamford is a different player now, in different circumstances - and he acknowledges that himself.

"The last time [I was in the Premier League], maybe people said I wasn't ready - but I didn't have a proper go at it," said the 27-year-old Englishman.

"It is a fresh start for me to prove I belong here. If I keep on doing it the boys will be happy and I'll be happy.

"This time I have a manager who believes in me and, as long as I keep working hard, he will keep trusting me."

The stats are certainly racking up in Bamford's favour...

He now has 32 goals in 78 Leeds appearances since joining from Middlesbrough, for whom he scored his only other professional hat-trick - against Leeds in February 2018.He is just the second player to score in Leeds' opening three away league games in a top-flight season, after Gordon Hodgson in 1937-38.His six goals in six games at the start of a Leeds Premier League season can only be matched by one player - Eric Cantona.And his performance saw you reward him with a stunning average rating of 9.23 on our Player Rater - the highest given so far this season.

How Bamford scored his goals...

Bamford has often been criticised for his profligacy in front of goal, but his three goals on Friday were a masterclass of ruthless, predatory finishing...

55 minutes: The simplest of the three, seizing on a loose ball for a tap-in after Emiliano Martinez had saved Rodrigo's low shot.67 minutes: A superb, rising finish into the top corner from 20 yards after receiving the ball from Mateusz Klich. It is only the second of his 30 Leeds league goals to come from outside the area.74 minutes: Completes his treble with another pinpoint finish into the far top corner after he is found in the box by Helder Costa.

"In the first half I missed two good chances, but once the first went in it settled us," added Bamford.

"The crucial thing was we didn't give up any part of the game. In general, we controlled the game and we played it our way.

"Villa are a good team. I think someone said Bielsa is a myth, but I think we have shown Leeds are here and are here to compete."

"Very happy for Patrick [Bamford] because he scored some wonderful goals," said the Argentine. "Apart from that he is a noble player who sacrifices a lot for the team - generous also.

Bielsa has now overseen three Premier League victories, all of which have showcased the tireless work ethic and attacking intent for which his side are renowned.

They have also given Liverpool a scare, despite a defeat on the opening day, and gone toe to toe with Manchester City to secure a draw.

Friday's win lifts them up to third in the table in the Premier League - their highest position on the football ladder since September 2002.

"It was an important game for us and a deserved triumph," Bielsa added.

Alan Greenwood: GET IN. Oh what a display! Great performance from the lads. What an individual performance by Bamford. Hopefully that will shut his critics up for good!

Tony: Absolutely ecstatic with Leeds' performance tonight. I always knew Bamford had it in him to light this league up.

PG, Bournemouth: As a Chelsea fan I'm tempted to sigh regretfully about Bamford and moan about another one that we needlessly let go of. But would he ever really have prospered at Chelsea without someone like Bielsa?

Vit4l V3locity: The first goal was class from Bamford. The second, in that crowded space, was pure magic!