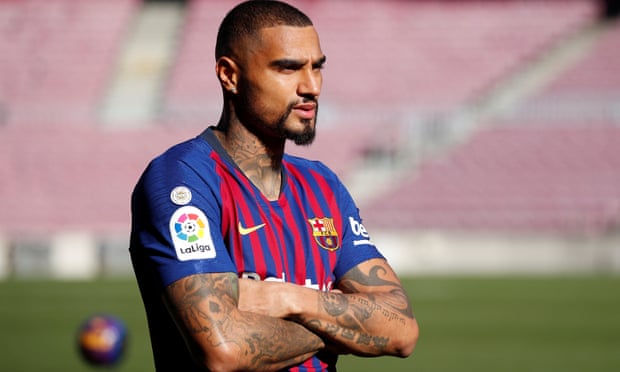 Barcelona’s latest signing is football royalty, just not the way they expected. Late on Monday night, in the club store just across the concourse from the Camp Nou, closed to the public, he stood smiling and holding up his new shirt: “Prince, 19”.

From Hertha to Tottenham, from Dortmund to Portsmouth and, five clubs and nine years later, from Sassuolo to Barcelona, Kevin-Prince Boateng’s 10th club is the biggest of them all. It was also the biggest surprise; their new centre-forward comes from leftfield, unforeseen by anyone.

Boateng described this as a huge “opportunity”. It is one he did not expect, echoes of the day that his agent told him he was going to Milan and Boateng thought he was joking. Some in Spain reacted similarly when the news broke with the deal already done. Boateng joins on loan, with an €8m optional purchase clause in the summer. The headlines in the Catalan papers came with exclamation marks. Boateng, the “hidden option”, “the surprise”, ran the front pages.

Barcelona had been searching for a back-up striker, someone to take some of the pressure, and the minutes, off Luis Suárez. The criteria was clear and it limited their options: they wanted a player with experience and the personality to contribute from the start, but prepared to be substitute. Someone cheap too, although the cumulative effects of hurried deals costs. And someone who could leave as easily, and fuss-free as he arrived. A short-term solution to a specific problem, which could have been foreseen in the summer. Perhaps it should have been. What they didn’t foresee then was Antoine Griezmann opting to stay at Atlético.

Last year’s Champions League defeat in Rome weighs on their minds, their great regret at the end of a season in which the won a domestic double which felt almost eclipsed by European failure. Suárez later admitted that he wished he had rotated more before that night and Barcelona have made no secret of the fact that they are desperate to win the Champions League. They felt they needed numbers, but also personality. When Munir El Haddadi departed, it underlined that they felt he was not the support striker they sought and so they turned to the market.

Álvaro Morata had been offered but the cost was high and they remained unsure about his mid- to long-term fit. Cristhian Stuani seemed a perfect solution but his buy-out clause is €15m. The idea of bringing Carlos Vela back from the United States was discussed. Sights were being lowered, it seemed. In the end, it was Boateng who arrived from Sassuolo. His last club in Spain was Las Palmas. Just the names of those two clubs raise questions and naturally there are some doubts about his level, even if there is a willingness to wait, an awareness that this is about resolving a specific, smaller issue.

Boateng comes as a centre-forward and he has played up front, although he is not a natural No 9. His arrival, while it makes some sense, hints at a certain improvisation, an uncertainty, in Barcelona’s planning. It also underlines some of the pressures placed upon that planning. This market is not one Barcelona and Madrid can dominate any more, and the Catalan club had to confront some of the consequences of their spending. Over the summer, Barcelona’s expenditure on salaries came down by €28m – because it had to. 70% of their budget went on salaries last season; it is down to 66%, but that remains high and there is still a need to cut costs.

A clear model can sometimes appear difficult to discern, and the departure of Neymar deepened that sensation, increasing the pressure on the board. Barcelona had expressed their certainty that he would stay but he did not. “If we said we had spent €270m on two players we would have to resign for [being] irresponsible,” said Albert Soler, the club’s director of sport. In total, they spent more than that on Ousmane Dembélé and on Philippe Coutinho, who they did not succeed in signing that summer. Face was lost. In the autumn, Soler departed.

Kevin-Prince Boateng: ‘Mandela shook my hand and said: my daughter wants to marry you’ Read more There have been other changes in the structure of the sporting directorate. Robert Fernández has departed. Before him, there was Andoni Zubizarreta. Raul Sanllehi left just before Soler. The sporting manager is Pep Segura, Eric Abidal is the technical secretary, and Ramon Planes his assistant. Planes is considered the most capable, but does not carry great authority. There’s the president Josep Maria Bartomeu and his direct advisors too. Ernesto Valverde is the coach, not the manager, and his own future is far from secure. Ariedo Braida is reported to have been the key man in bringing in Boateng. He has long felt unheard at Barcelona, lost amidst may voices.

Robert Fernández signed Artur, one of the few players seen as a “Barcelona” style player, and at a time when fewer footballers are making it from the youth system. The signing of Paulinho surprised and didn’t exactly delight purists, seemingly a total rupture with the club’s identity, but he was successful – and then immediately returned to China. Arturo Vidal surprised too, although his signing was justified as being a player in the Paulinho mould. He is not really, just as Coutinho has not proven to be quite the “Iniesta” he was proclaimed to be.

After a difficult start, Dembélé is impressing greatly. Malcom was taken off Roma at the last minute, Barcelona leaping in on Monchi’s deal. The manager, though, did not really want him and a departure in this window is a possibility. And other pursuits are ongoing, from Adrien Rabiot to Frenkie De Jong. But it would be fair to suggest that some fans are lacking faith that they will be completed. Rodri, perhaps the most natural replacement for Sergio Busquets, joined Atlético. And Griezmann of course stayed there, when Barcelona were convinced they were getting him.

The Frenchman was a market opportunity: he might not have been a natural fit in the Barcelona first XI, but he was a player of the very highest level available for just €100m (£88.1m). Barcelona chased and thought they had closed a deal. They brief that it was done. But Griezmann announced that he was not going to Barcelona after all on a TV documentary, produced by the Barcelona defender Gerard Piqué. The president didn’t know and Barcelona didn’t have their striker. They do now.