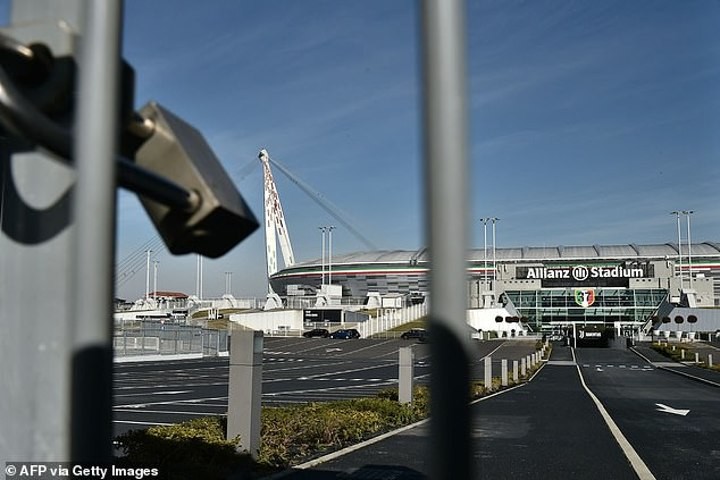 It is not just in England that coronavirus has hit football. In leagues around Europe, games have not been played for weeks as the pandemic spreads across the continent.

But there seems to be light at the end of the tunnel in a number of nations and plans are being put in place to bring the action back. Those vary in detail and design from country to country.

Sportsmail has asked experts from across Europe to explain how their leagues are plotting a return...

Almost all Bundesliga clubs returned to training this week, with strict social distancing regulations in place to limit the risk of on-pitch infection.

Players have been forced to change on their own, before training in small groups with tackling and close contact strictly forbidden.

Yet with Germany's tight restrictions on public life in place until April 19, a return to full-scale matches still seems a long way off.

The German Football League (DFL) is set to convene again on April 17 and assess the current plan to resume the season at the beginning of May. With the financial survival of many clubs in the balance, the DFL is keen to finish the season by June 30 so as to guarantee income from TV rights.

Some had mooted the idea of a mini-tournament held in one or two stadiums, but the current plan is to hold games on the usual weekly basis from the first or second weekend in May.

The games would be held behind closed doors, with only around 250 people allowed into the stadium.

Initially outraged by the idea of so-called 'ghost games', most fans are now resigned to the fact that they will not be allowed back into stadiums for months after the league resumes. Borussia Moenchengladbach supporters are even planning to produce tens of thousands of personalised cardboard cut-outs to replace the real supporters.

Yet amid criticism from medical professionals, the May restart is far from a foregone conclusion.

Proposals to test each player every few days once the games get back underway have been met with outrage by doctors who point out that German labs are already approaching their testing capacities.

Once the football does resume, it is increasingly likely that the dogmas of the traditional Bundesliga calendar will be scrapped.

Legendary Bayern and Dortmund coach Ottmar Hitzfeld called this week to temporarily get rid of the summer and winter break after the coronavirus crisis.

'We can play through the winter like the English do, I don't see a problem there,' he said.

LaLiga have drawn up a special ‘back to training’ protocol for clubs with a view to bringing the competition back at the end of May.

The protocol has been drafted by medical teams from three league clubs and has been distributed to the 42 teams in the top two divisions.

The idea is that training will be reintroduced gradually with the number of players allowed to train together incrementing day by day until entire squads can train as one group.

There will be tests every so often for the players to ensure no one contracts coronavirus. Clubs have also been advised to select hotels where they could be based in isolation during the mini pre-seasons that will take place before the restart.

Spain is still in full-lockdown but the state of emergency should be lifted on April 26.

La Liga is also willing to restart ahead of other leagues if it finds itself in a situation where it could do that.

Financially, president Javier Tebas has said that even if the season is played out in front of supporters there will still be a €150m (£131m) hole in revenue because of what has already been lost.

If remaining games are played behind closed doors then the damage will run to €300m (£262m).

On the bright side he says around 90 per cent of television money for this season has already been received. It would however need to be repaid if the season cannot finish.

In Italy we are uncertain about the future of clubs and the return to normality in Serie A. Some teams do not intend to return to play and many players have chosen not to train even if the club wants them to come back to the training ground.

In Serie A, the battle for pay cuts seems to have no respite. Juventus reached an agreement to save about €90m in wages: Ronaldo chose to give up €10m, Gonzalo Higuain and Paulo Dybala for €3.5m, Douglas Costa and Miralem Pjanic for about €2.5m.

The problem is that this choice has not been shared by other clubs. Some are yet to announce that all players have accepted wage cuts.

At Lazio, president Claudio Lotito wants to return to the playing field as soon as possible, challenging all the rules of health and safety. The Formello training center is the largest in Italy and enjoys extraordinary security measures.

The club has experts in the field of sanitation and has demanded that all teams return to training – like German clubs.

Juventus, on the other hand, are determined to finish the Serie A season but only when the contagion curve has a greater drop, falling below 100 new cases per day.

They want certain guarantees and have not yet called back the players who have returned to their homeland – Ronaldo, Sami Khedira, Pjanic, Douglas Costa, Danilo.

The problem for Juventus is related to the need to have certainties on the resumption of training because all the players who went abroad will have to go through another 15 days of forced quarantine.

Blaise Matuidi still tested positive for COVID-19 and the club extended his quarantine stay in Turin.

The club believes it can start Serie A again in a short time and has already thought about home training for players who will have to comply with the additional 15-day quarantine.

Brescia, who are owned by the ex-president of Leeds Massimo Cellino, are against the resumption of the competition like most of their players, including Mario Balotelli.

The former Manchester City star has repeatedly said that he is afraid of infecting his mother, girlfriend or even his daughter. According to Brescia , there are no conditions by which they can end the season. Cellino may refuse to play the last 12 Serie A matches.

In Serie B, the biggest issue is cutting salaries. The association of footballers chaired by Damiano Tommasi, a former Roma player, has asked that the cuts are not compulsory for all players. He wants them to take into account the different salaries.

There is a battle over the percentage of the cuts to be applied. The 30 per cent reduction in wages would ruin entire families because wages are very low in Serie B.

Frosinone, who are third, have clarified that they do not accept any promotion of the top two teams in Serie B. They will battle against Benevento and Crotone in the courts, if needed.

If Serie A became 22 teams, Frosinone, managed by Alesasndro Nesta, would choose a legal battle to defend their right to play the play-offs.

Below Serie B, the situation is embarrassing because salaries are even lower  and there is the risk of not getting the cuts required by the clubs.

The problem is also corporate: many teams would think of laying off many employees and this would create a catastrophic economic void.

Bari are pushing for an innovative idea: to promote all the best teams of the three groups of Serie C and Lega Pro.

That is a choice that rewards not only the Apulian club but also Reggina.

Unlike the other major leagues across Europe – but similar to the situation in England – there are no concrete talks in France over when football might come back.

Instead, there are constant conversations about how to offset the financial disaster that could take hold there.

Players in the top two tiers of French football have provisionally agreed to temporary salary cuts in a week where the reality of the coronavirus crisis hit home in Ligue 1.

The likes of Paris Saint-Germain stars Neymar and Kylian Mbappe could see their wages for April slashed by 50 per cent as part of a scheme laid out by Philippe Piat – the president of UNFP, the French football players association.

‘We ratified the proposition this morning,’ he told AFP. ‘The idea is that the players defer part of their April salaries to allow the clubs to get by.’

The scheme is set up to help clubs through the difficult period, after both TV rights holders Canal+ and BeIN Sports froze their payments to Ligue 1 and 2.

The plan is for those salaries to be reimbursed when the broadcasters resume payments, and while the programme is not compulsory, it is thought few will refuse to sign up.

With the area of player wages tackled, there is still concern over how clubs can raise any income in the meantime.

Teams in the top two divisions are currently at odds over a proposal to secure a loan against future TV deals.

According to L’Equipe, clubs are discussing the possibility of lending between €300m and €500m against the next rights, struck with Mediapro.

The Spanish broadcaster has secured the Ligue 1 rights for the period between 2020 and 2024 for the total of €780m per annum, but there are complications in using the money as a guarantee – as there is only a letter of commitment as opposed to an actual contract.

However, it is the human cost of the coronavirus that French football has been left to count this week.

The 60-year-old, who was with the club for 20 years, took his own life after being diagnosed with the coronavirus, leaving behind a letter explaining his actions.

It was announced on Wednesday, too, that Lorient president Loic Fery had contracted the virus.

It has put the discussions of football returning thoroughly on the backburner, though Reims president Jean-Pierre Caillot has indicated he hopes that top flight could resume in June as normal.

Meanwhile, players are still taking training into their own hands. In a week where they should have been preparing for a Champions League quarter-final, Paris Saint-Germain players are keeping themselves in shape in different corners of the globe.

Neymar is back in Brazil with his family, while Edinson Cavani has made it back to Uruguay, with several other stars dotted around Europe.

Closer to home, the club have set up their own fundraising initiative for local hospitals. PSGengagé has been launched with the club having already raised €315,000 through donations and the sale of their special edition ‘Tous Unis’ tops.