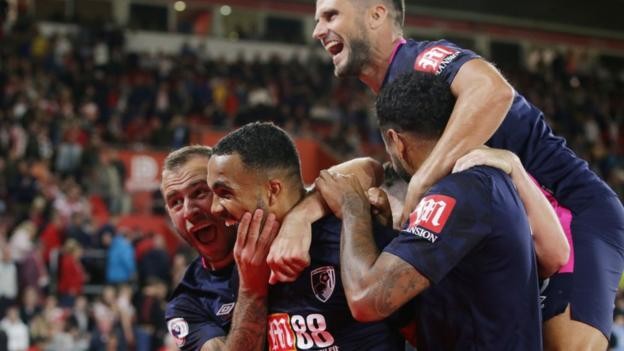 Eight of Nathan Ake's 11 Premier League goals have been scored from corners, including seven of his last eight

Bournemouth's fans - observing from the dreamland of third place in the Premier League - were united in praise of manager Eddie Howe as they celebrated after the final whistle at Southampton.

It may be only a brief stay in this lofty position behind reigning champions Manchester City and current leaders Liverpool but no-one could begrudge them their ecstasy in one corner of St Mary's.

Bournemouth are only six games into the season and previous campaigns under Howe have been characterised by both landmark victories, such as the 4-0 demolition of Chelsea last season, and unaddressed chaotic defending that saw them concede 70 goals last term, only relegated Fulham and Huddersfield Town letting in more.

Who can blame them, however, for wondering just how far this season might take them given that after the top three - we can include Tottenham in elite this group - the Premier League has a very fluid look.

The top six may be a stretch but on the other hand they dealt comfortably with Everton in last Sunday's 3-1 win and if the Merseysiders have aspirations of that goal then it is patronising to suggest Bournemouth should not think the same way.

Those supporters chanting "the south coast is ours" are certainly entitled to ask themselves how far Bournemouth can go this season.

They will certainly cast a glance at their best finish since arriving in the Premier League in 2015/16 - ninth the following season - and believe they have a chance of at least equalling that.

Bournemouth were highly impressive in beating Southampton 3-1. They are team with a genuine identity, particularly the pace and power of Callum Wilson and Josh King that makes them such a threat on the counter attack.

This pair terrorised Southampton in the first half, when Ralph Hasenhuttl's shambolic formation saw the likes of Cedric Soares and Kevin Danso deployed as square pegs in round holes with predictable results.

Nathan Ake put Bournemouth ahead but their crowning moment was a picture-perfect second goal from Liverpool's on-loan midfield man Harry Wilson as he swept in Philip Billing's pass after 35 minutes.

This was the Howe template. Quick passing and a clinical finish. It was a snapshot of Bournemouth's performance and an illustration of why Howe, despite those regular defensive deficiencies, has impressed so many of his peers with his work.

The emphasis is on passing and pace but strengths lie elsewhere as Ake's goal means they have now scored more goals from set-pieces (five) than any other team in the Premier League this season, excluding penalties.

Harry Wilson only lasted 62 minutes but showed enough to confirm the wisdom of bringing him to Bournemouth on loan with his third goal of the season. The 22-year-old is a performer of culture and variety with this sort of goal in his repertoire as well as his set-piece expertise.

The longer-term question is whether Liverpool will find a place for Wilson but he is making a strong case for far closer examination from manager Jurgen Klopp when the time comes.

Wilson's record is impressive. He scored 18 goals in 49 appearances with six assists for Derby County last season and was on target seven times and assisted four on loan at Hull City in 2017/18. In 60 games for Liverpool under-23s since 2014 he has scored 32 and assisted 14.

He is part of what is an impressive Bournemouth package but expectations must be tempered by the realism of what we have seen under Howe before and what is often allowed to go under the radar - namely those occasional defensive capitulations and shows of naivety that have undermined them.

At Southampton, however, their performance was complete and testimony to Howe's acumen, which has not only taken them into the Premier League but firmly established them there.

Bournemouth picked Southampton apart in the first half but when the Saints' recovery and improvement came as Hasenhuttl finally balanced up his formation, Howe's side were composed and resolute. There was no sense that they would give way.

And through it all they carried a constant threat courtesy of the flying machine King and the physicality, and no little pace, of Callum Wilson.

Since the start of last season, Callum Wilson has been directly involved in 16 goals away from home in the Premier League (11 goals, 5 assists), more than any other player.

The latter completed the formalities after a mix-up between Southampton goalkeeper Angus Gunn and defender Jan Bednarek.

It was of little overall consequence as it was the final act of the game but it gave the scoreline the sort of convincing appearance Bournemouth's superiority deserved as they recorded their first win at Southampton at the 16th attempt.

And could it be that Bournemouth and Howe are finally learning how to add steel to that soft centre after a fourth win in their last eight Premier League games, losing three and drawing one of the others?

Howe will not be carried away. He knows Bournemouth's base camp at the start of every season, in the eyes of most, is Premier League survival.

He should certainly, though, be allowing himself a glance at the top 10 with a growing belief that Bournemouth can muscle their way in and around that group.