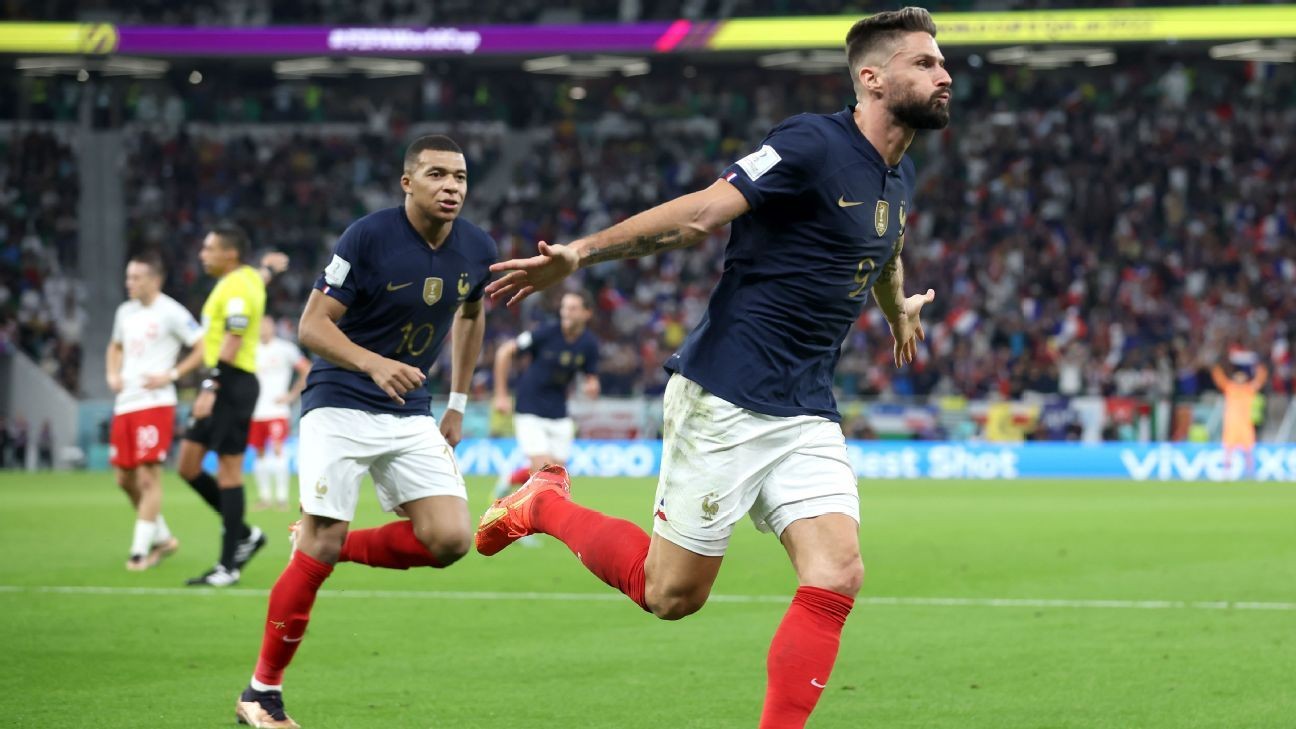 Thierry Henry's long reign as the France men's national team's all-time top scorer has come to an end after AC Milan striker Olivier Giroud's goal against Poland in the round of 16 at the World Cup saw him take the record from his fellow ex-Arsenal forward.

Giroud equalled Henry's 15-year-old record when he scored two goals when Les Blues began their campaign in Qatar with a 4-1 win over Australia on Nov. 22, and Dec. 4 saw the 36-year-old's name into the history books. However, neither player can hold a candle to Eugenie Le Sommer, the veteran of the France women's national team who has scored 86 goals in 175 appearances for Les Bleus and counting.

Still, over the course of an 11-year career with the France senior side, Giroud has amassed 52 goals in 116 games, eclipsing the 51 goals in 123 games set by Henry. Sadly, the pair never got to play alongside one another for their country as their respective international careers didn't overlap: Henry retired from international football in 2010, while Giroud made his senior debut the following year.

Here's a look at how the two players at the top of France's all-time scoring list compare in terms of their individual contributions to cause.

Henry officially became France's all-time top scorer in 2007, when he scored twice in a 2-0 victory over Lithuania in a Euro 2008 qualifier. A few months after leaving Arsenal to join Barcelona, the silky striker increased his international tally to 43 goals at the Stade de la Beaujoire in Nantes to move clear of Michel Platini.

Platini had reigned as France's leading scorer for 22 years, having notched his 41st and final goal for Les Bleus at the 1986 World Cup against Brazil in the quarterfinals, before retiring the following year. He'd inherited the record from the great Just Fontaine, Golden Boot winner at the 1958 World Cup, who with 30 goals in just 21 games for his country had stood as France's previous top international goal scorer since 1960.

While few could have predicted such a turn of events, Giroud has earned his place as his nation's all-time record holder. The powerful striker has been a reliable stalwart for Didier Deschamps, providing a physical presence and aerial outlet few can match.

Giroud made his senior international debut in 2011 and notched his first goal in February the following year on his third cap, when he opened the scoring against Germany in a friendly by steering a low Mathieu Debuchy cross directly underneath Tim Wiese. Since then, Giroud has continued to find the net at a steady rate of 0.45 goals per game at international level. His most productive calendar year in terms of international goals was 2017, when he scored eight goals in five games for France. He also scored eight goals in 2016, but took six games to do so.

Henry's average scoring rate for France stands at a comparable 0.41 goals per game. His most productive calendar year came in 2003 when he scored 11 goals in 14 games.

Breakdown of Giroud's 52 goals for France

Giroud didn't manage to score or even register a single shot on target at the 2018 World Cup despite leading the line for Deschamps' side in six matches in Russia, playing 465 minutes in total. Regardless, he still emerged a world champion as France lifted the trophy.

However, he did score at the 2014 World Cup, in a 5-2 group-stage drubbing of Switzerland, and has got himself back amongst the World Cup goals in Qatar,.

He has scored one hat trick for France, notching the first three of his side's goals in a 5-0 friendly victory over Paraguay in 2017 -- a feat that, surprisingly, Henry never achieved during his international career.

Breakdown of Henry's 51 goals for France

Henry made his debut for France as a lithe left winger in a friendly against South Africa in October 1997. Having only just turned 20 at the time, the Monaco youngster started the game and played all 90 minutes in a 2-1 win for Aime Jacquet's side.

Henry's first senior goals for France came at the 1998 World Cup, when he burst on to the scene with one strike against South Africa and two against Saudi Arabia in the group stage as Les Bleus won the tournament on home soil. The former Arsenal and Juventus forward undoubtedly scored more goals for France at major tournaments (12) than Giroud (five), though both have scored two goals in knockout stage games:

Giroud
Two goals vs. Iceland in quarterfinal of Euro 2018

While Giroud has five goals and counting for France in the UEFA Nations League, a competition which did not exist until eight years after Henry had stopped playing for his country. Likewise, Henry scored four of his international goals at the Confederations Cup, which was abolished as a competition in 2017 shortly before Giroud had hit the 30-goal mark for France.

Henry holds the record for playing the most World Cup matches for France (17), an accolade he shares with goalkeeper Fabian Barthez. He has also appeared at four men's World Cup tournaments -- 1998, 2002, 2006 and 2010 -- a feat only matched by current goalkeeper and France captain Hugo Lloris. Giroud, meanwhile, is playing at his third World Cup, and both he and Henry can boast having hoisted the trophy aloft once in their respective careers.

However, even without the injured Karim Benzema, with Giroud alongside Kylian Mbappe and Antoine Griezmann as France's attacking options he has a real chance of firmly eclipsing Henry by retaining the World Cup in Qatar.